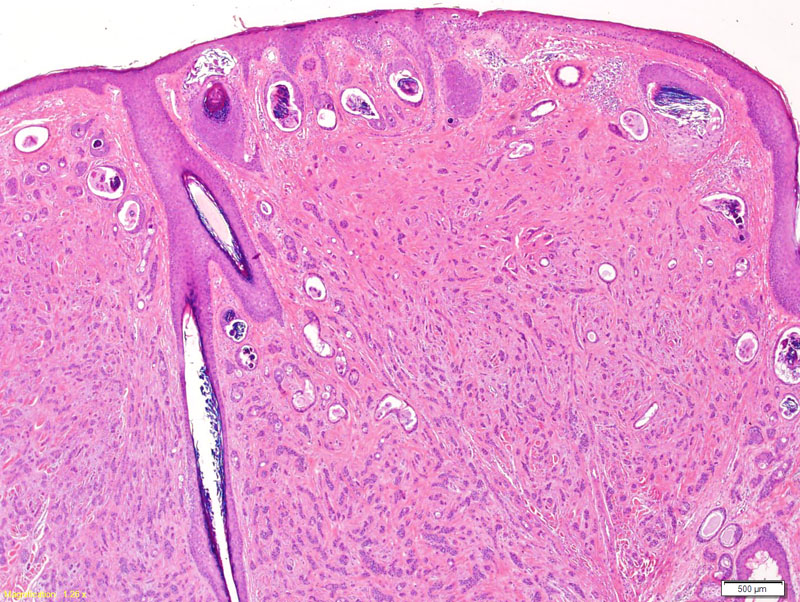 The superficial portion may be indistinguishable from a syringoma. One must look for extension into the subcutis or perineural invasion.

Note the ductal structures with a tadpole appearance.

Microcystic adnexal carcinoma (MAC) is a rare malignant appendageal tumor and is also known as syringomatous carcinoma and sclerosing sweat duct carcinoma. Some splitters consider sclerosing sweat duct carcinoma as a separate entity because unlike MAC, it does not have horn cysts. MAC contains both follicular and eccrine differentiation, and although it has benign histologic features, it exhibits aggressive local behavior.

Histologically it is characterized by islands or strands of basaloid cells, ductal structures, and keratinizing cysts in the dermis and subcutis. There is often a desmoplastic response of the surrounding stroma and perineural invasion. Given its benign histologic features, it is rare to find cytologic atypia or mitotic figures.

Syringomas share several morphologic features with MAC, but syringomas are more superficial and circumscribed helping to distinguish the two. MAC characteristically has single tumor cells scattered throughout which is not present in syringomas.

MAC occurs predominately on the head and neck although other rare sites including the axilla, nipple, and lower extremities have been reported in the literature. It often presents as a solitary, slow growing, firm, pink to flesh-colored ill-defined plaque. The average size at presentation is reported to be 2cm.

It usually presents in elderly individuals with a predilection to occur on the face, suggesting UV irradiation as a risk factor. Paresthesia and/or numbness are common symptoms associated with MAC as there is often perineural invasion.

Surgical excision is the standard of care, with the option of radiation as adjunct therapy. Mohs micrographic surgery is favored as the first-line surgical treatment to conserve tissue and improve outcome.

It is a locally aggressive and deeply infiltrating tumor with a high potential for local recurrence. There is frequent recurrence despite aggressive treatment with surgery and/or radiation therapy. The recurrence rate when treated with Mohs micrographic surgery range from 0-12% compared to 30-47% with standard surgical excision (Lountzis). It is rare to have regional and distant metastases (Chiller).