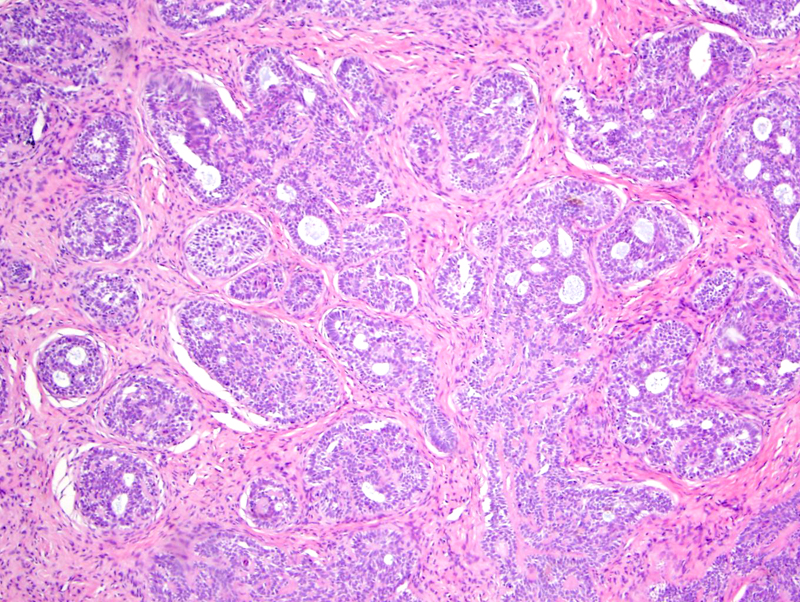 Low power view demonstrating islands of basaloid cells in a background of cellular stroma; this was located in the deep dermis.

In both trichoepithelioma and trichoblastoma, the key entity on the differential diagnosis is basal cell carcinoma (BCC). Similarities between trichoblastoma and BCC include a basaloid proliferation with periphal palisading. Mitotic activity can be seen in both entities. However, in BCC, the patient population tends to be older, whereas in TB, the patients are younger. Furthermore, BCC arises in sun-exposed areas whereas TB can arise anywhere in the skin. BCC is more superficial (usually in the dermis), whereas TB is located in the deep dermis or subcutaneous tissue (Alsaad). It is said that the artefactual clefting often seen in BCC is minimal or inconspicuous in TB, however, depending on processing of the tissue, this particular feature may not be all that helpful.

Trichoblastomas are commonly observed in association within a pre-existing nevus sebaceous (a.k.a. organoid nevus, nevus sebaceous of Jadassohn) or may occasionally co-exist with a basal cell carcinoma. Note that Ackerman has identified five subtypes of trichoblastomas (large nodular, small nodular, cribriform, retiform, and racemiform), but unless you are Dr. Ackerman, you may not be able to distinguish between these subtypes.

Trichoblastomas typically present as skin colored to brown or blue-black papules and/or nodules that are non-ulcerated, solitary masses. The most common location is the head and neck, especially on the scalp and face of adults in the forth to fifth decade of life. They have also been frequently described in the pelvic girdle (Schulz).

Treatment is by complete surgical excision.