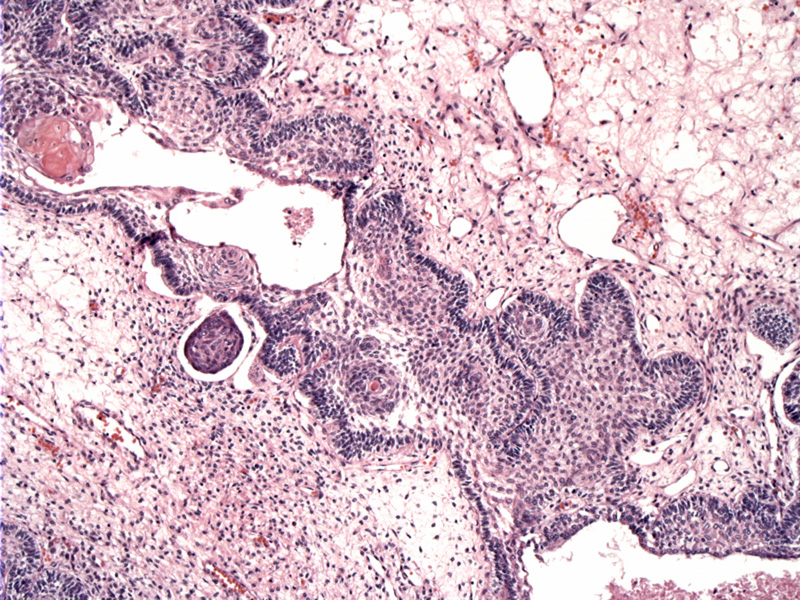 Epithelial islands are set in a background of loose reticulated stroma. The stroma appears reticulated due to fluid accumulation.

Keratinized nodules are present within the epithelial islands, which are outlined by pallisading columnar cells.

Cystic spaces may be filled with eosinophilic proteinaceous fluid.

MRI shows a solid and cystic mass in the sellar/suprasellar cistern which causes local mass effect, splaying the cerebral peduncles and causing superior displacemnt of the fornices. The impression is compatible with craniopharyngeoma.

Calcifications can be abundant and are present in most tumors.

Craniopharyngioma is a mostly benign epithelial tumor of the sellar or suprasellar (above the sella turcica) region. The tumors are typically cystic in nature.

The most common histologic pattern is seen mostly in children, the so-called "adamantinomatous craniopharyngioma". These tumors are characterized by anastomosing epithelial islands with palisading layer of epithelial cells, foci of squamous metaplasia and nests of keratinization and frequent calcification (75% of cases). Cystic degeneration is very common and the contents of the cyst is often described as viscous fluid resembling machinery oil and containing cholesterol crystals (best seen when polarized) (Fernandez-Miranda, Rosai).

The other subtype, papillary craniopharyngioma (10% of craniopharyngiomas), is seen in adults and lack the features typical for adamantinomatous craniopharyngioma. Macroscopically, there is a papillary appearance and histologically, a solid pseudopapilllary squamous proliferation is seen with keratinization of individual cells (Rosai).

The affected age is bimodal and includes both children and adults, typically in the range of 65-74 years. Due to their anatomic location (near the pituitary and optic chiasm), patients may present with endocrine dysfunction and visual problems.

Althought histologically benign, these tumors can invade adjacent structures and may recur after a seemingly total resection. Morbidity may be extensive in some cases. Survival in the pediatric population is excellent, but less so in affected adults.

→Forms from remnants of Rathke's pouch.

→Two subtypes are described: adamantinomatous (most common, seen in children) and papillary (rare, seen in adults).