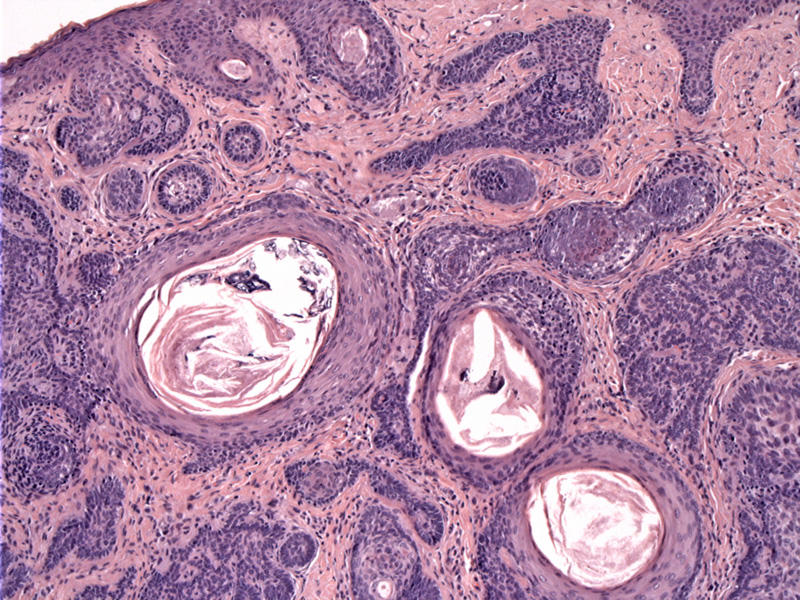 Horn cysts are present in the tumor
IMAGE DESCRIPTIONS

Case 1 - Trichoepithelioma is a biphasic dermal based tumor composed of epithelial elements and a cellular stroma. Horn (keratin) cysts are common and basaloid cells appear to bud from these cysts.

Papillary-mesenchymal bodies can be seen, which consist of basaloid cells cupping and engulfing fibroblasts. The lack of a fibromyxoid stroma helps differentiate this from basal cell carcinoma.

Case 2 - This particular case demonstrates a cribriform pattern of the basaloid cells. This pattern is quite common in trichoepitheliomas.

Trichoepithelioma is a benign biphasic adnexal tumor composed of epithelial and stromal elements. The epithelial structures include islands of basaloid cells and horn cysts, which are basically abortive attempts at pilar differentiation. The stromal elements consists of a fibrous stroma that envelopes the epithelial elements (Rosai, Basam).

One unique histologic feature is the formation of papillary-mesenchymal bodies, which are cup-like proliferations of basaloid cells engulfing fibroblasts, thus recapitulating papillae of hair follicles (Basam). The cellular stroma is distinct from the stroma of the dermis and tightly encircles the epithelial elements. Note that there is no retraction of the stroma commonly seen in basal cell carcinoma (Fletcher, Basam).

Trichoepitheliomas must be distinguished from basal cell carcinoma. In BCC, there is prominent retraction spaces around the basaloid cells, and this is not prominent in TE. Horn cysts and papillary mesenchymal bodies are characteristic in TE, but not seen in BCC.

In rare instances, multiple arise in a familial setting or as part of a syndrome. Brooke-Spiegler syndrome is an autosomal dominant disorder resulting from germline mutations of the cylindromatosis oncogene (CYLD). BSS patients develop multiple skin appendage tumors such as trichoepitheliomas, cylindromas and spiradenomas (Basam).

→Brooke-Spiegler syndrome is autosomally dominant disease due to a germline mutation in the cylindromatosis oncogene (CYLD) and is characterized by multiple cylindromas, trichoepitheliomas, and occasional spiradenomas.

→The key entity on the differential diagnosis is basal cell carcinoma.