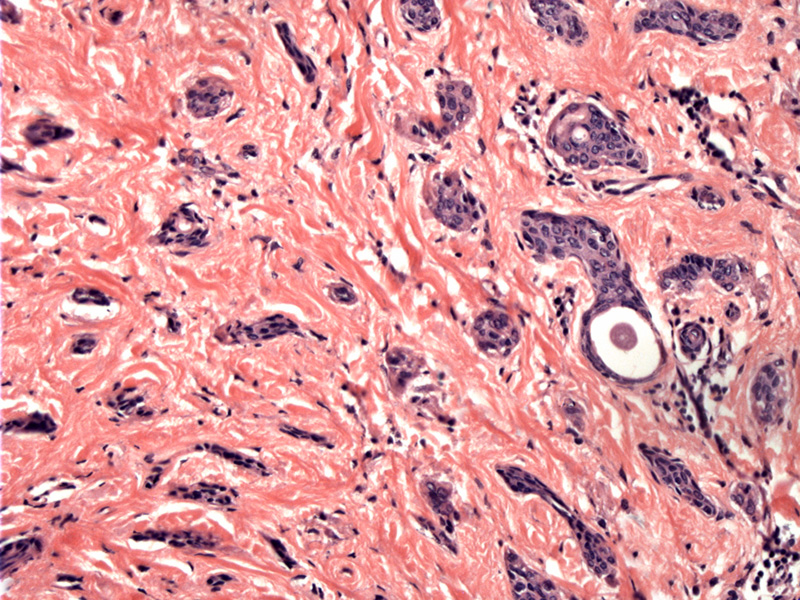 Case 1: There is a proliferation of small ducts in the upper dermis embedded in a collagenous stroma. These ducts often have "tails" and thus have shapes variably described as commas, tadpoles and tennis rackets. The ducts are lined by one or two layers of attenuated or cuboidal epithelial cells. Clear cell change is not uncommon.

Case 2: Low power view of a lesion removed from the eyelid shows teardrop shaped nests of epithelial cells and ducts. The ducts are often lined by two cell layers of cuboidal epithelium. An eosinophilic, PAS-positive and diastase-resistant material sometimes occupies the lumen, as seen in this image.

Syringoma are benign neoplasms of the sweat gland, arising from eccrine sweat ducts.

The key differential is microcytic adnexal carcinoma, which extends deep into the dermis and is associated with infiltrative basaloid cords and perineural invasion. Distinguishing between the two may not be possible in a superficial shave specimen, however (Busam).

These small skin-colored papules are typically clustered around the eyelids of young women. These eruptions often occur during puberty. Other sites include the axilla, vulva and around the umbilicus.