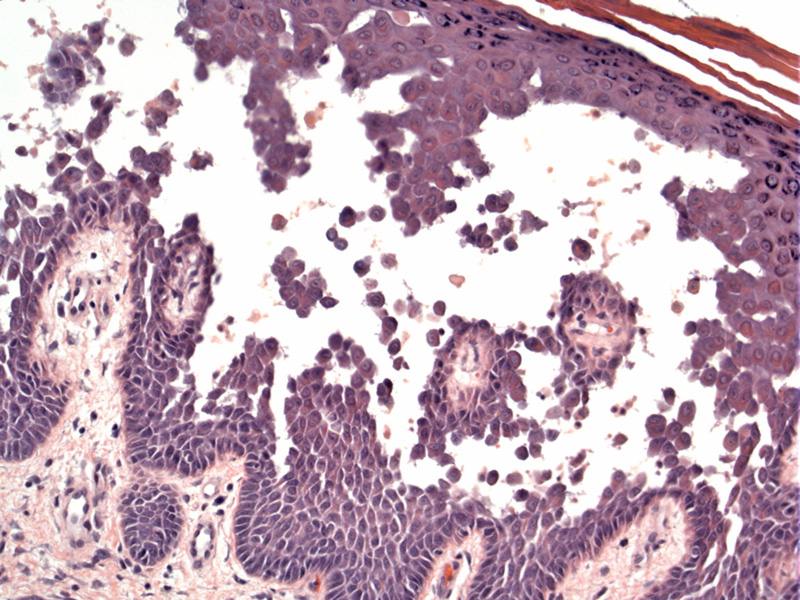 Case 1: Extensive acantholysis is seen, and is described looking like a dilapidated brick wall. The split results from intraepidermal acantholysis.

The genetic lesion is that of ATP2C1 on chromosome 3, encoding a calcicum/manganese pump (SPCA1). The defect appears to affect kerationcyte adhesion, and as a result, the keratinocytes in the epidermis fall apart. The appearance of the epidermis is often described as a "dilpidated brick wall".

Histologically, it is characterized by acantholysis throughout the epidermis, occasionally forming intraepidermal blisters. Dyskeratotic keratinocytes (corps ronds and corps grains) are seen sometimes. There is usually a perivascular lymphocytic infiltrate. Immunofluorescence is negative for antibodies, in contrast to pemphigus vulgaris (Rapini, Busam).

Vesicles and erythematous plaques with crusts occur commonly in intertriginous sites (groin, neck, axilla). There may be asymptomatic longitudinal white bands on the fingernails. Although it can occur at any age, the disease usually appears in the 3rd or 4th decade.

The course of disease naturally waxes and wanes in intensity.