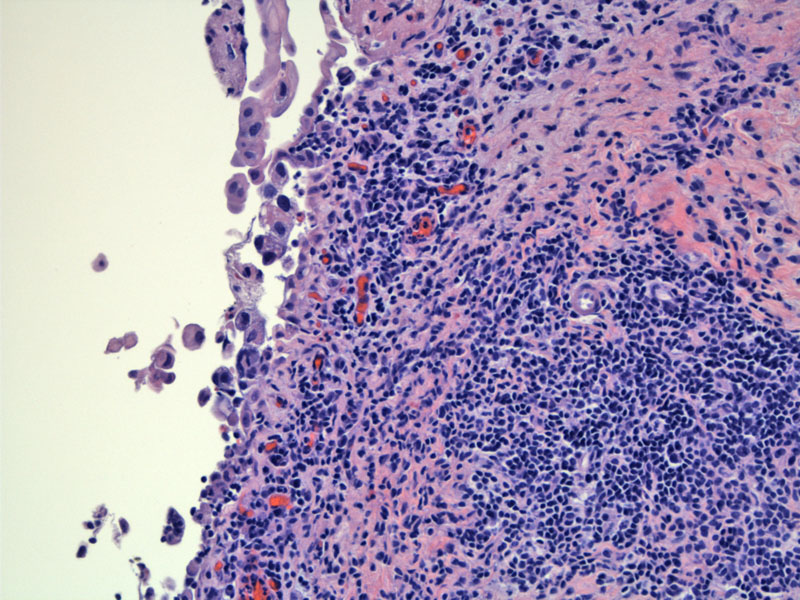 This biopsy shows inflamed mucosa with denuding cells. Close inspection of the nuclear features show hyperchromasia and enlargment, consistent with carcinoma in situ.

For those not fully convinced, an adjacent area on the same biopsy shows small aggregates of denuded epithelial cells.

Higher power of this area shows nulear enlargment and irregular outlines, along with hyperchromasia.

The corresponding urine sample on this case shows degenerative changes and a few intact single cells with hyperchromatic nuclei. Cohesive groups are lacking.

The lower half demonstrates confluent CIS while the right upper half of the image shows normal urothelium. Loss of polarity, increased N/C ratio and prominent nucleoli can be seen.

Large cells with dark nuclei are concentrated in the left portion of the image, with a few CIS cells admixed with normal appearing epithelium to the right.

Despite the cytoplasmic degeneration due to the denuded nature of these cells, the malignant nature is still evident in the urine cytology specimen.

Urothelial (transitional cell) neoplasms represent ~90% of all bladder tumors, and the remainder consist of squamous cell carcinoma, adenocarcinoma, small cell carcinoma and sarcomas.1 Although mainly located in the bladder, these lesions can occur anywhere where there is urothelium such as the renal pelvis and urethra. Transitional cell carcinomas are divided into two main categories: papillary and flat (sessile) types.

CIS can have a pagetoid pattern of growth, where the malignant cells percolate along the basement membrane.

Grossly, the bladder mucosa may be erythematous, granular and edematous. CIS is often multifocal. Because of the unique tendency of CIS to be discohesive, they slough off and will often be found in urine cytology specimens.

CIS is often found in association with high-grade and invasive papillary carcinomas, although some CIS lesions appeared to be isolated. If untreated, 50-67% of CIS will eventually progress to invasive transitional cell carcinoma.1,3