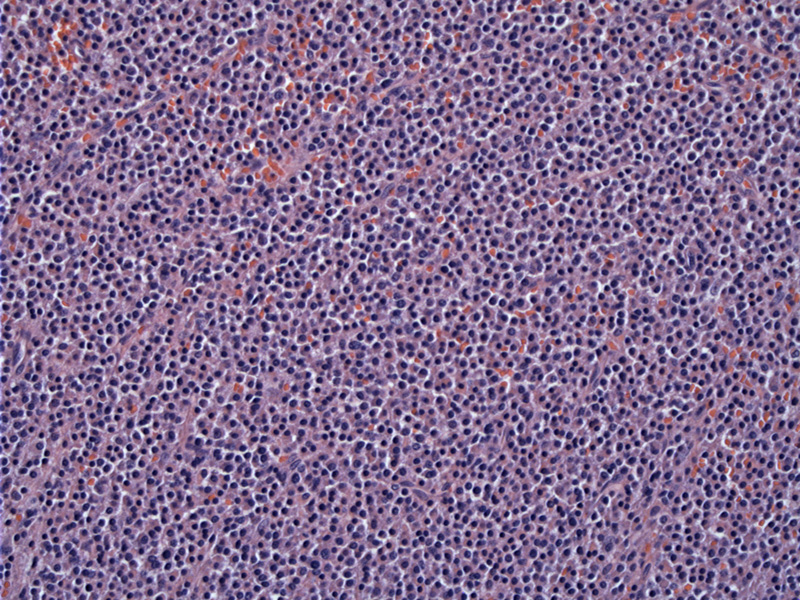 This is an example of solitary plasmacytoma of bone (clavicle in this case). Biopsy shows large sheets of mature plasma cells that have replaced the normal osseous architecture. Plasmacytomas are frequently vascular with minimal stroma (Rosai).

A clonal population of plasma cells is identified with an immunohistochemical stain for lamda light chain.

Plasmacytomas are clonal collections of either mature or immature plasma cells that occur in bone (solitary plasmacytoma of bone) or outside bone (extramedullary plasmacytoma). They represent only 3-5% of plasma cell neoplasms, are more common in men and typically present in the fifth decade of life (International Myeloma Working Group).

In order to make the diagnosis of plasmacytoma, a systemic process must be ruled out. The lesion must be an isolated finding with no evidence of plasma cell infiltrate in the bone marrow, no radiologic evidence of other lesions, and no other findings that could suggest myeloma (anemia, hypercalcemia, renal dysfunction). Occasionally a low level of monoclonal protein may be found in the serum or urine.

Patients with osseous involvement most often present with bone pain or a pathologic fracture. The axial skeleton is the most common site of involvement, especially the spine. The extramedullary form most commonly affects the upper respiratory tract and patients typically present with related symptoms such as nasal obstruction or epistaxis.

The standard of care is radiation to the involved site.

→ Most common site of solitary plasmacytoma of bone is the axial skeleton, especially the spine.

→ In order to make the diagnosis of plasmacytoma, a systemic plasma cell process must be ruled out.