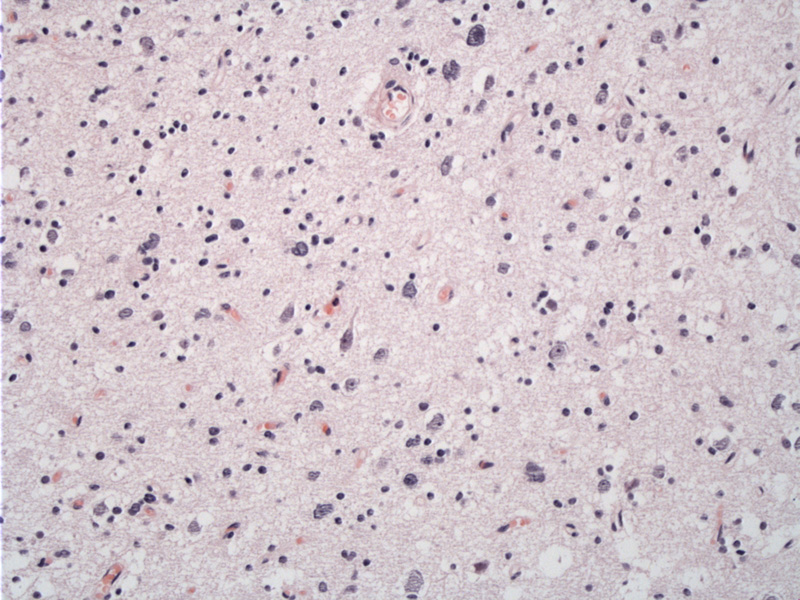 The specific glioneuronal element of DNTs are columns consisting of axons lined by oligodendrocytes, which are perpendicular to the surface of the cortex. S-100 or synaptophysin immunohistochemistry would highlight the axons.

DNTs have cystic areas filled with mucin, which may contain neurons.

The floating neurons of DNTs are mature neurons that float in pools of mucin, which appears clear on H&E stain and can be highlighted with Alcian blue stain.

Dysembryoplastic neuroepithelial tumors (DNT) are benign lesions predominately located in the cortex (usually supratentorial and in the temporal lobe) of children and young adults where they cause drug-resistant partial seizures. They are considered WHO Grade I. They are theorized to arise during embryogenesis and their formation regulated by the embryonic environment.

Recently, DNTs are considered a spectrum of tumors that cannot be reliably distinguished from ordinary gliomas based on histology. Thus, there diagnosis requires clinical presentation and imaging features to be considered.

Grossly, the most common features is a viscous consistency (glioneuronal component) associated with firm nodules. The subcortical white matter may be involved.

Histologically, the classic hallmark is "specific glioneuronal element", which appear as columns consisting of axons lined by oligodendrocytes, which are perpendicular to the surface of the cortex. Between the columns are classically "floating neurons", which "float" in a eosinophilic background, which may contain also GFAP-positive stellate astrocytes. Immunohistochemistry for S-100 highlights the axons and GFAP highlights the lining oligodendrocytes.

There are 2 forms of DNTs, simple and complex. The simple form is adjacent to normal cortex and shows only the glioneuronal element as described above, which may be patchy. The complex form is heterogenous with nodules of glial cells, giving it a multinodular architecture. There is associated glioneuronal elements, which varies among cases and within the same tumor. The glial areas in complex DNTs are highly variable with the following possible appearances: nodular or diffuse, mimic of low-grade gliomas with nuclear atypia, mitosis, necrosis or endothelial hyperplasia. Endothelial hyperplasia may appear as glomerular formations, act as vascular malformations and can hemorrhage, undergo hamartomatous calcification and may be mitotically active and hyperplastic appearing. There may or may not be associated cortical dysplasia with a loss of the cortical layered appearance. Presence of mature neurons, without atypia is an important finding within DNTs. This feature and the lack of lymphocytic cuffing in DNTs rules out gangliogliomas. (Note, gangliogliomas contain ganglion cells and lymphocytic cuffing.)

Patients typically present with a long history of drug-resistant partial seizures, that may progress to generalized seizures, usually in their teens/twenties. The patient may have focal neurological problems or the DNT may be associated complex congenital neurological deficits.

Clinicians may suspect DNT when a patient presents with 1. partial seizures before 20 years; 2. no progression of neurological problems; 3. cortical lesion without mass effect or surrounding edema.

Subtotal excision is considered curative due to their long term stability.

Prognosis is good as DNTs are benign lesions, which are slow growing and non-infiltrative and do not recur in the vast majority.