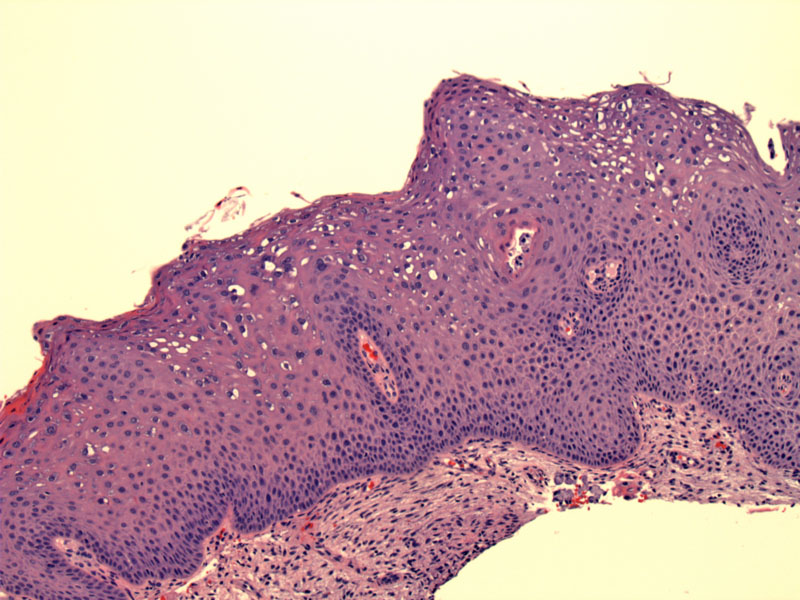 The changes in LGSIL are seen in the superficial layers.
IMAGE DESCRIPTIONS

LGSIL (CIN I) demonstrates nuclear enlargement and hyperchromasia at the surface epithelial cells. Koilocytic atypia (further described below) is also seen in these superficial layers. Note that the basal layers remained unaffected.

Normal squamous mucosa of the cervix for comparison.

Koilocytes with enlarged raisinoid nuclei are clearly demonstrated here. Some have prominent perinuclear clearing. Note that due to the tangential sectioning, the unaffected basal layers are not clearly seen in the image. Remember that in LGSIL, only the surface layers (approximately top third of the epithelium) demonstrate viropathic changes.

Corresponding cytology demonstrates increased N/C ratio and koilocytic change with irregularly contoured nuclear membranes. There is sharply demarcated perinuclear clearing with condensation of the cytoplasm at the periphery.

A cluster of squamous cells with low grade dysplasia. Note the well-demarcated halos of HPV effect. There is a central clearing around the nuclei and the cytoplasm is condensed to a rim at the periphery of the cell. There is moderate nuclear enlargement and hyperchromasia as well.

Sometimes there is a brightly orangophilic cap of cells with clearly dysplastic nuclei, a clue to an underlying dysplasia.

By comparison, this orangophilic surface cap of cells (upper left) does show nuclear hyperchromasia but the outlines remain smooth. There is Candida infection (bottom right), and as such it may represent a reactive keratosis.

One must be aware that tangential sectioning in low grade dysplasia may simulate a higher grade lesion.

Inflammation can cause vesicular chromatin changes and the presence of a nucleoli, but the nuclear enlargement and overall coarseness of the chromatin leads to a diagnosis of LGSIL rather than inflammatory change in this case. Additionally, adjacent foci showed more obvious LGSIL.

HPV is now known to be the most important oncogenic factor in cervical neoplasia. It is important to keep in mind, however, that HPV is not the only factor involved in oncogenesis. Host immune response and other environmental factors play a large role in whether the infection is cleared or progresses through the dysplasia-neoplasia sequence.

High-risk subtypes can cause either LGSIL or HGSIL, a subset of which will progress into invasive cancer. Although most textbooks display an orderly progression from CIN I to CIN III, it is important to note that not all squamous lesions begin as CIN I. Depending on the viral subtype and host factors, the lesion may start as CIN II or CIN III (Kumar).

Infections can be productive or nonproductive (Woodman):

In productive infections, the viral DNA does not integrate into the host DNA and remain in "episomal" rings. In the intermediate and superficial layers of the epithelium, nucleic acids replicate from episomal DNA and are packaged into virions. Both early (E1,E2,E3,E4,E5,E6,E7) and late genes (L1,L2) are expressed, as late genes are required to encapsulate replicated viral DNA into virions. Low-grade lesions are associated with productive infections in which infectious viral particles are produced and shed.

In nonproductive infections, the viral DNA integrates into the host chromosome. Virions are not produced and only early genes are expressed. This integration of viral genome is associated with high-grade lesions and the progression to invasive cancer.

LGSIL is often asymptomatic. It is typically diagnosed on colposcopy using dilute acetic acid. Lesions are classically described as weakly acetowhite with geographic borders. Abnormal vascular patterns are not associated with LGSIL.

As malignant progression rates are low, patients with this lesion are expectantly managed. Some patients with chronic LGSIL may undergo cervical cone biopsy to clear the lesion. There is a significant rate of coincident HGSIL when LGSIL is discovered so it is important to adequately evaluate patients presenting with this lesion.

LGSIL is most often cleared by the immune system. Malignant progression rates are low.

→Koilocytic change, nuclear enlargement and perinuclear halos at the upper third of the epithelium are key cytologic features in CIN I/LGSIL

→Be aware of changes that mimic dysplasia such as squamous metaplasia, reactive atypia, reparative atypia and inflammatory atypia.