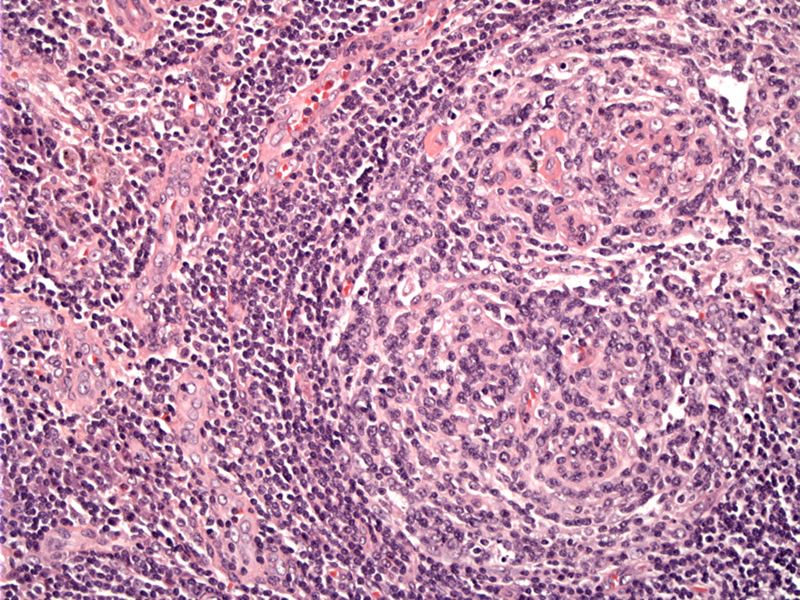 Follicular hyperplasia is accompanied by vascular proliferation and some sclerosis.

An eosinophilic infiltrate is prominent. The cells with fluffy cytoplasm are histiocytes.

Kimura's disease is an idiopathic inflammatory disease affecting predominantly young to middle-aged men in Asia. Only about 200 cases have been reported outside of Asian countries. Patients present with subcutaneous nodules of the head and neck, with involvement of the cervical lymph nodes and salivary glands (Weiss). These patients also have eosinophilia in their peripheral blood as well as elevated serum levels of IgE. The etiology of Kimura is unknown, but the presence of eosinophils suggests a hypersensitivity reaction (Sahu).

Histologically, there is reactive follicular hyperplasia, and the germinal cells are vascularized with infiltration by eosinophils, neutrophils and mantle zone B-lymphocytes. Occasionally, necrosis of the germinal centers and intrafollicular eosinophil "abscesses" may be seen. The presence of eosinophilis and hypervascularity extends to paracortex as well. Thus, the triad of Kimura's disease is as follows: (1) florid reactive hyperplasia (2) cortical and paracortical eosinophilia (3) cortical and paracortical hypervascularity.

Kimura's disease (also known as eosinophilic lymphogranuloma) should be distinguished from angiofollicular hyperplasia with eosinophilia (ALHE). The latter condition affects middle-aged women in Western countries. Adenopathy and peripheral eosinophilia are rare. Both Kimura's disease and ALHE share features of vascular proliferation with an infiltrate consisting of lymphocytes, plasma cells and eosiniophils. Vessels lined by prominent endothelial cells that protrude into the vessel is a key distinguishing feature of ALHE. The lymphoid follicles, eosinophil abscesses and sclerosis seen in Kimura's are spare or absent in Kimura disease (Seregard).

The typical presentation is that of a head and neck mass, cervical lymphadenopathy and peripheral eosinophilia. Common sites of involvement include the parotid and the epitrochlear, axillary, and inguinal nodes. Nodules can be pruritic and tender. Because of the IgE deposits, glomerulonephritis occur in 1/2 the patients. Nephrotic syndrome may ensue. Men in the Far East are much more commonly affected. The M:F ratio is approximately 7:1 with a median age of 28 years (Larroche, Sahu).

The condition is benign and indolent, with the nodules gradually increasing in size over the years. Spontaneous resolution is uncommon but have been reported. Surgery may be necessary for cosmetic reasons,

Prednisone may be indicated for relapses and for renal involvement with good efficacy, but with a risk of relapse upon withdrawn. Radiation is usually used for the local control of lesions not responsive to steroids.

→Endemic in Asia and rare in the West, most common in men in their 3rd decade.

→It is a distinct entity from angiolymphoid hyperplasia with eosinophilia.