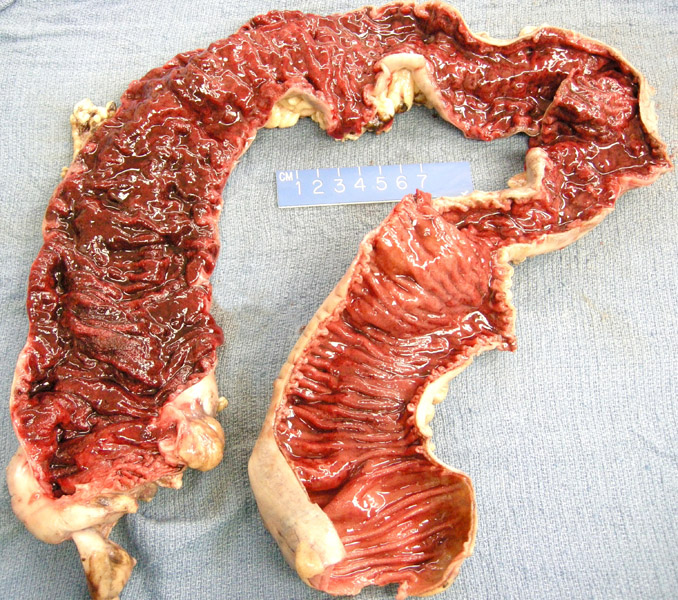 The entire length of the colon shows severe erythema and friability, consistent with ulcerative colitis. Note the absence of strictures and fistula formation characteristic of Crohn disease.

A closer view of the hemorrhagic and granular surface -- some areas may contain ulcers and pseudopolyps, but it is difficult to appreciate with this amount of hemorrhage.

On endoscopic examination of patients with UC, the intestinal mucosa presents with friability, erythema, ulcerations, and pseudopolyps.

Mucosal bridging in an area consistent with chronic colitis due to UC.

The chronic mucosal injury pattern in ulcerative colitis shows crypt architectural distortions and branching. The glands no longer extend to the muscularis mucosae. An overall increase in lamina propria inflammatory cells is also typical. The presence of neutrophils in the crypt epithelium (cryptitis) and inside the crypt lumen (crypt abscess) indicates active disease.

Another image demonstrating branching of glands and architectural distortion

Glandular drop-out is present, along with an increase in Paneth cell metaplasia. Note that Paneth cells are normal findings from the right colon to the distal third of the transverse colon, after which, their presence is metaplastic and indicates mucosal injury.

With chronicity the glands in the colon may assume a broad villous architecture, due to expansion of the lamina propria by capillaries and inflammatory cells. Acute inflammation is also present within the epithelium.

Yet another image demonstrating marked gland distortion, with some horizontally misshapened forms and distal branching. To the right a gland is dilated and filled with neutrophils, forming a crypt abscess.

There is a severe architectural disturbance, with marked gland drop-out and distortion. Additionally, hyperchromatic nuclei are appreciated along the surface. This mucosal protrusion is almost like a pseudopolyp, which is mucosa that bulges outward flanked by ulcerated mucosa.

Closer inspection reveals enlarged nuclei with cellular crowding, indicative of low grade dysplasia in the setting of ulcerative colitis. Dysplasia is categorized as flat, or associated with an endoscopically visible (usually sessile or raised) lesion. Most patients with low grade dysplasia can be treated with increased surveillance. However, recently a study found that the five-year predictive value of low-grade dysplasia for the development of either high-grade dysplasia or cancer may be as high as 54%, and thus colectomy is often recommended (Connell).

Here is an example of a healed pseudopolyp.

A proliferation of ganglion cells can often be found in them.

The idiopathic inflammatory bowel diseases include two major entities: Crohn disease (CD) and ulcerative colitis (UC). UC affects the rectum and may involve part of the colon or the entire colon (pancolitis) in an uninterrupted continuous pattern. Of note, patients treated with topical anti-inflammatory therapy (suppository or enema form) can demonstrate “segmental” inflammation. UC results in mucosal inflammation and unlike CD, UC spares the deeper layers of the intestinal wall. Granulomas characteristic of CD are not found in UC.

Patients with inflammatory bowel disease are at risk for extra-intestinal manifestations such as oral ulcers, primary sclerosing cholangitis, ankylosing spondylitis, uveitis, arthritis and psoriasis. There is also an increased risk of dysplasia and adenocarcinoma. The strongest risk factors for carcinoma in UC are the extent and duration of disease. A reasonable estimate of malignancy is that the risk increases approximately 1%-2% per year after the first ten years of UC.

Bimodal distribution with the major peak at age 25-35, and a minor peak at age 60-70. Males and females equally affected. Patients present with recurrent episodes of bloody mucoid diarrhea. Symptoms generally abate on their own, or with treatment. Toxic megacolon and perforation are rare, but dreaded complications. There appears to be a familial association with up to 25% of patients having an affected relative.1,2

For mild to moderate disease, topical treatment (in the form of enemas or suppositories) with 5-aminosalicylic acid (5-ASA) is the treatment of choice. Patients with severe disease should be managed with intensive intravenous treatment including high-dose steroids and surgery if medications fail to control disease. Those patients with UC for at least seven to eight years are considered at risk for developing carcinoma and should be entered into a colonoscopic surveillance program.

The strongest risk factors for carcinoma in UC are the severity and duration of disease. 60% of patients have mild disease without systemic symptoms; 97% of patients will have at least one relapse within 10 years and 30% will undergo colectomy for fulminant disease -- usually within the first 2-3 years.2

The most important sequelae of UC is cancer. In patients with pancolitis longer than 10 years, the risk of developing carcinoma is 20-30 times higher compared to the general population. DNA damage and microsatellite instability have been found throughout the entire intestinal tract in UC patients, suggesting a underlying DNA repair deficiency in these patients. Thus, carcinomas can occur anywhere in the intestinal tract and often occur in multiple locations. To further complicate matters, the carcinomas are often infiltrative and may not form discrete masses, and inflammation from UC may mask underlying dysplasia and carcinoma.2

Some studies stress the distinction between dysplasia-associated lesions or masses (DALM) and sporadic adenoma-like masses (ALM) as prophylactic colectomy is often recommended for DALM while polypectomy may be sufficient for ALM.