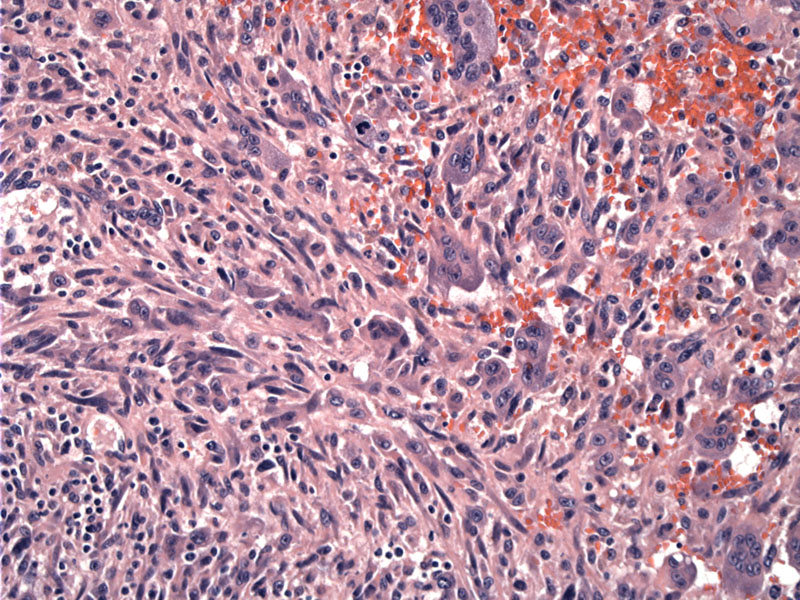 Giant cells blend with mononuclear cells as the cells have indistinct cell boards. There is some hemorrhage associated with the tumor which is typical.

In this view, the giant cells are packed in almost back to back, many with >20 nuclei and this is not unusual.

The mononuclear cells can be spindled, mitotic figures can be frequent, but there should NOT be atypical forms.

Some osteoid (usually focal) may be formed.

A high power of multinucleated giant cell - they resemble osteoclasts. Mitosis is never seen in these giant cells.

Foam cells are common and may impart a yellow hue to the gross appearance.

A storiform proliferation may be seen, suggestive of a fibrohistiocytic lesion.

A CT scan shows a centrally located cystic lytic tumor. There is no periosteal reaction.

Giant cell tumor of bone is characterized by a proliferation of multinucleated, osteoclast-like giant cells admixed with mononuclear cells. Older terms for this include osteoclastoma and benign giant cell tumor, however, due to a small risk (2%) of metastases and locally aggressive behavior of this tumor, the term "benign" was dropped (Folpe). Intravascular tumor plugs may be seen in the periphery of the tumor, but are not adverse prognostic factors.

In terms of IHC, the cells exhibit features of macrophages (CD68 positive) and osteoclastic cells (positive for TRAP, calcitonin and parathyroid hormone).

Most occur in skeletally mature individuals (young adults) with a slight female predominance. Swelling and pain are common presentations. GCT tends to arise in the epiphyses of the long bones (distal femur, proximal tibia). But GCT can arise in almost any location including ribs, scapula, skull and very rarely, small bones of the hands and feet.

In 25% of cases, there will be recurrence after surgical excision. Two percent metastases to the lung and in 1% of cases, there may be dedifferentiation i.e. a high-grade sarcoma arises from the tumor (Folpe).

→Almost all are centered in the epiphyses.