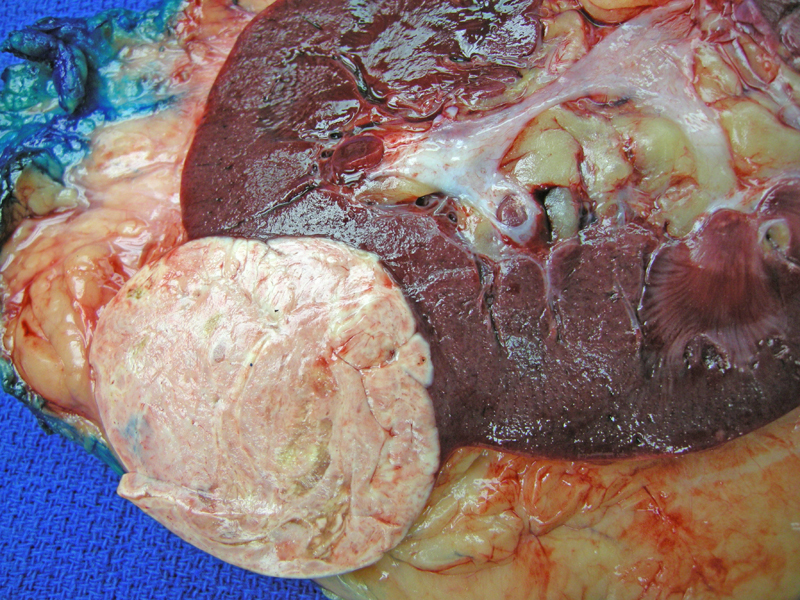 Grossly, papillary RCCs are well-circumscribed spherical lesions with a pale-tan or brown granular cut surface. Although not demonstrated here, hemorrhage and necrosis is present in up to two-thirds of cases. Calcification is quite common as well.1 Note that the tumor must be larger than 0.5 cm, otherwise, it would be classified as a papillary adenoma (aka cortical adenoma).

Papillary or tubulopapillary growth is typical of most tumors. Note the uniform single layer of cells with scant cytoplasm lining the tubulopapillary structures. The nuclei are round with inconspicuous nucleoli. These features are consistent with type 1 papillary RCCs.

Parallel arrays of tubular growth are seen. At times, the tubules may be compressed and tightly packed, imparting a solid growth pattern.

Expansion of the fibrovascular cores by foamy macrophages is a key feature of papillary RCC. In this image, the cells demonstrate a moderate amount of clear cytoplasm. The nuclei contain prominent nucleoli and exhibit moderate pleomorphism. Although the cytologic features are most consistent with type 1 papillary RCCs, it is important to keep in mind that type 1 and type 2 papillary RCCs are not distinct separate entities and histologic features may overlap.

Intracytoplasmic hemosiderin (as a result of hemorrhage) is also a characterisitic feature. These pigmented deposits may be found in the stroma, epithelial cells, or macrophages.

A different case of papillary RCC demonstrates an interesting and important point. At first blush, it would be tempting to classify it as a type 2 due to the eosinophilic cytoplasm. However, note that the nuclei are rounded and uniform with inconspicuous nucleoli. The papillary cores are lined by a single layer of cells and not pseudostratified. Thus, this tumor is more consistent with type 1 morphology. Thus, it would be an eosinophilic variant of type 1 RCC.

At higher power, the round uniform nuclei with inconspicuous nucleoli are seen. The papillae are lined by a single layer of cells. In contrast, prominent nucleoli, pleomorphism and pseudostratification are seen in type 2 papillary RCC.

Papillary renal cell carcinoma accounts for approximately 10-15% of renal cell carcinomas. Histologically, papillary RCCs are characterized by a papillary or tubulopapillary architecture with true fibrovascular core, which may be hyalinized, thickened or expanded by foamy macrophages. Psammomatous calcifications and hemosiderin deposits are frequent findings. Papillary RCC also demonstrates the unique cytogenetic aberrations of trisomy 7,17, and loss of Y (in men).

Two variants of papillary RCC have been described: type 1 and type 2.

Papillary RCC exhibits similar demographics as conventional RCC. For example, it is more common in men (M:F ratio of 2:1) and the peak incidence is between 50-55 years. Bilaterality and multifocality is more common in this subtype.

Better prognosis than that of clear cell renal cell carcinoma, with a 10 year mortality of approximately 16%, compared to 40% for the conventional (clear cell) RCC.1,2

→Characterized by chromosomal gains (e.g. trisomy of tetrasomy of 7 and 17).