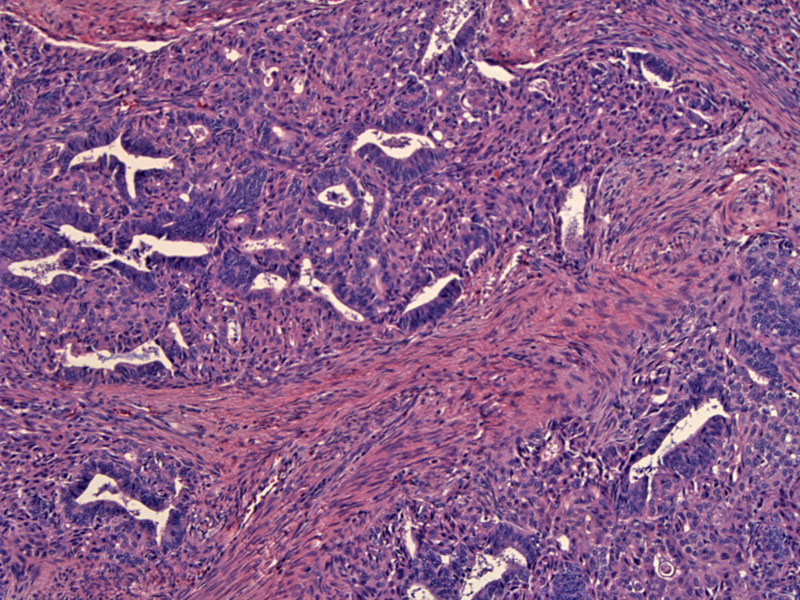 On low power, there is a vague lobulated archictecture as groups of endometrial glands are separated by fascicles of smooth muscle. The smooth muscle bundles form interlacing fascicles and may occasionally exhibit mild atypia. There should be no more than 2-3 MF/10 HPF in the mesenchymal component.

Squamous morules (one is seen in the left lower corner) consist of balls of metaplastic squamous cells that fill and obliterate the glandular lumen. These morules are found in 90% of cases and are helpful diagnostic features.1

The endometrial glands frequently exhibit moderate atypia, as demonstrated by a crowded complex architecture and cytologic atypia. Here the glands have a serrated lumen and branching architecture. The glandular cells are losing their polarity and exhibit moderate pleomorphism.

This image demonstrates very crowded irregular glands with very little stroma between the glands. The degree of glandular crowding and cytologic atypia may even approach that of an adenocarcinoma. In fact, there are rare documented cases of well-differentiated endometrial adenocarcinoma arising from atypical polypoid adenomyoma. To distinguish between the two entities, consider the age of the patient, presence of squamous morules, desmoplastic stromal response and overtly malignant cytologic features.

This lesion shows a predominance of squamous metaplasia and bland glandular cells.

Atypical polypoid adenomyoma is a rare entity belonging to the family of mixed mullerian tumors of the uterus. The name accurately describes the morphology of these biphasic tumors; it is a polypoid lesion that consists of an admixture of endometrial glands (that may be atypical) and fascicles of smooth muscle.

Endometroid-type adenomyoma, an entity that closely resembles atypical polypoid adenomyoma, can be distinguished by the following features: (1) a rim of endometrial stroma surrounding glands and (2) lack of atypia of in the glandular component.

Occurs in women during later reproductive years (mean age of 39). Typically presents with abnormal vaginal bleeding. Pelvic exam is generally unremarkable, however, a polypoid mass may be seen protruding through the external os. The lesion is solitary and firm, with a lobulated or bosselated yellow-tan-white cut surface.

Generally excellent. Up to 45% of cases may recur after conservative excision. To note, lesions containing foci resembling well-differentiated carcinomas may have a higher recurrence rate, therefore, it is important to report this finding.