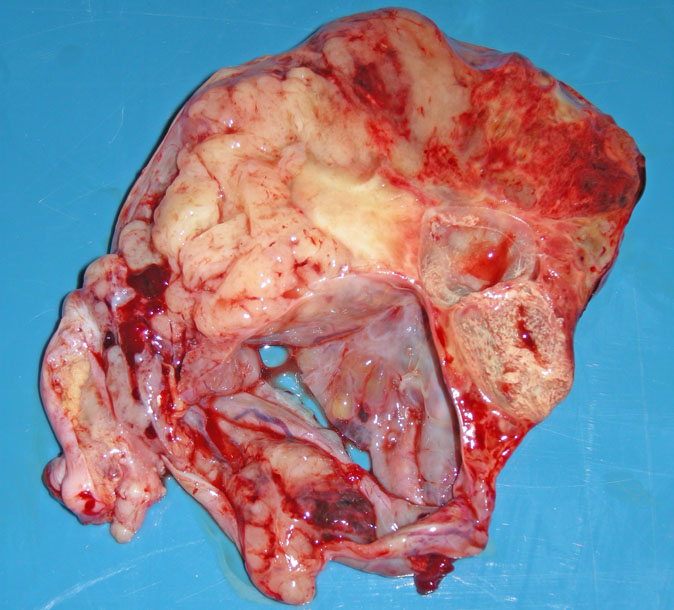 Solid, cystic and necrotic areas are present in this tumor.
IMAGE DESCRIPTIONS

Grossly, pure yolk sac tumors (YST) are nonencapuslated with a yellow-white, glistening appearance. Areas of solid, cystic and necrosis are common, as demonstrated in this case.

Another view of solid and cystic areas in this tumor.

Yolk sac tumors have a dizzying array of patterns, but the most common one is the microcystic-reticular pattern, consisting of numerous small thin-walled cysts lined by attenuated cells reminiscent of endothelial cells. Schiller-Duval bodies (not well-demonstrated here) are a distinctive feature of YSTs, but not always present. They are papillary structures projecting into the cystic lumen, composed of a central blood vessel, which is then surrounded by clear area of edema and several layers of neoplastic cuboidal and columnar cells. They may represent the tumor's attempt to form yolk sacs.1

Intracellular and extracellular hyaline globules are a distinctive feature found within the cystic areas. These globules, which contain AFP or alpha-antitrypsin, are not found other types of germ cell tumors.

This image demonstrates an admixture of microcystic with a more solid component. Note that the neoplastic cells have a slightly more spindled morphology with focal areas of myxoid stroma, best seen in the upper portion of the image. The tubules lack intratubular germ cell neoplasia.

Another area demonstrated mitotic figures and moderate pleomorphism, both common features in YST.

The tumor is diffusely positive for alpha-fetoprotein. A Shiller-Duval body is seen at 12:00 in this image.

Pure yolk sac tumor (YST; also known as endodermal sinus tumor) is a tumor of infants and young children. YST is also a frequent component of mixed-germ cell tumors (MGCT) in adults, however, the pure type is never seen in adults.

YST displays an astonishingly wide array of microscopic patterns, which is not surprising since all germ cell tumors are derived from a multipotent germ cell with the capacity to recapitulate embryonic and extra-embryonic structures. In the case of YST, the tumor will differentiate toward extraembryonic endoderm and mesoderm.

These tumors will stain positively for AFP, PLAP, keratins and often alpha-antitrypsin.

The pure type occurs exclusively in young children (birth to age 8, with the majority of cases occuring before age 3). In adults, YST is a frequent component of mixed germ cell tumors, with figures ranging from 40-80%.1,3

Presents as painless rapidly enlarging mass and an elevated AFP, which is a very useful marker for this tumor.

Excision (orchiectomy) for stage I pediatric patients. Adjuvant chemotherapy is used for cases of relapse or metastasis.3

Overall, pure yolk sac tumors in the pediatric population has an excellent prognosis, with a 5 year survival rate of 91%. Adults with mixed germ cell tumors have a poorer prognosis and survival depends on stage.