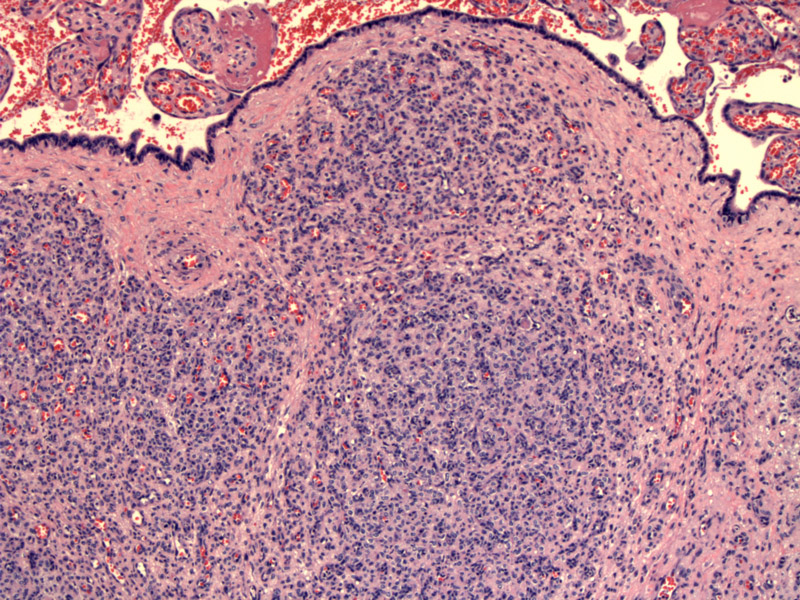 A nodular proliferation of small capillaries and stromal cells are seen.
IMAGE DESCRIPTIONS

A nodular proliferation of vessels and stromal cells are seen, lending an overall picture of hypercellularity. A key diagnostic feature is that the neoplasm is covered by trophoblast.

A closer view demonstrates the hypercellularity of this lesion. Small caliber vessels are surrounded by stromal cells.

Chorangiomatosis is also characterized by an increase number of capillaries, however, this proliferation occurs in the intermediate or stem villi. The terminal villi are spared. The vessels are surrounded by thicker walls as compared to chorangiosis. This process may involve the placental focally (several villi) or diffusely throughout the placenta. Diffuse chorangiomatosis appears to be associated with extreme prematurity, congenital malformations and intrauterine growth retardation.1,2

Chorangioma is a discrete nodular hamartomatous neoplasm composed of a proliferation of vessels and stroma. Similar to chorangiomatosis, they arise in intermediate and stem villi (and not terminal villi) and are found in approximately 1% of placentas.

Microscopically, chorangiomas consist of numerous fetal vessels that may be capillary or sinusoidal. The stromal component may be abundant. If the chorangioma is formed near the umbilical cord, Wharton's jelly may be a prominent component and lend the neoplasm a mxyomatous appearance. A distinctive feature of chorangiomas is that they are covered by trophoblast.

Grossly, chorangiomas are well-circumscribed and purple-red. They generally protrude as nodular masses on the fetal surface, but may be entirely located in the placental parenchyma (but near the fetal surface). Degenerative changes (calcification, infarction, thrombosis) are commonly found.

Small (less than 5 cm) tumors are asymptomatic. Larger lesions may cause fetal hydrops, intrauterine growth restriction, fetal anemia or thrombocytopenia. These complications are usually secondary to transplacental hemorrhage or sequestration of blood by the tumor.2,3

When tumors are diagnosed, fetal surveillance may be instituted in order to recognize fetal compromise when it begins. A balance between prematurity and fetal compromise guides timing of delivery.