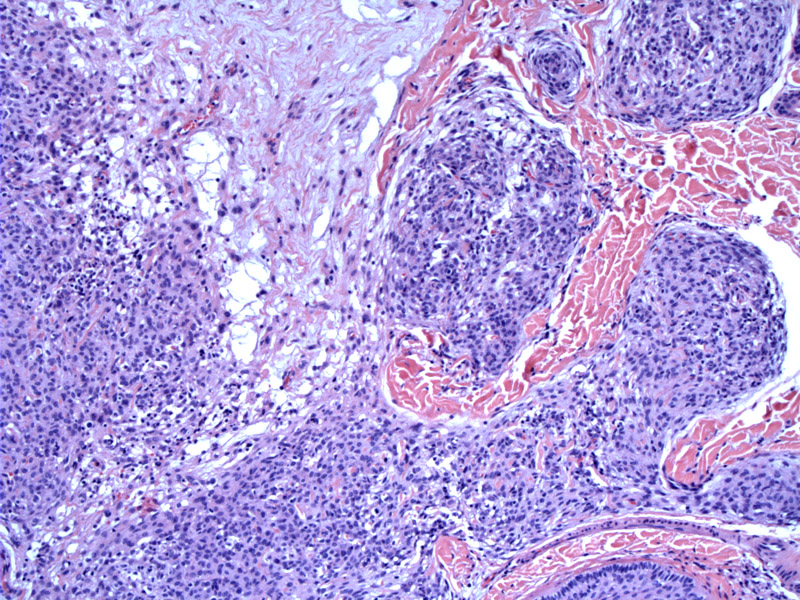 Nests of epithelioid cells with indistinct cell borders are separated by bands of collagen. There is a loose mxyoid component in the upper left.

The myxoid component is more prominent in this image. The nodules are separated by collagen bands.

Here is a more sheet-like area, composed of short spindled cells in a vaguely fasciular pattern, admixed with inflammatory cells.

Neurothekeomas (lat. theca = sheath, that which encloses) has three described variants: mxyoid, cellular and mixed. The mxyoid variant used to be considered synonymous with "dermal nerve sheath myxoma", however, many experts believe this is no longer the case. Myxoid NTK and true dermal nerve sheath tumor have been demonstrated to be distinct separate entities (Fetsch, 2005).

In an analysis of 178 NTKs (Fetsch et al 2007), the median age of diagnosis was 17. The typical presentation was that of a solitary, superficial nodule with the majority arising in the head, upper extremities and shoulder girdle (in contrast to a median age of 34 years and a predilection for extremites in nerve sheath myxomas).

Histologically, neurothekeomas were composed of multiple small or medium sized nodules separated by collagen bands. The nodules had a whorled pattern and contain variable amounts of myxoid matrix. Osteoclast-like giants were common. The tumor cells were positive for vimentin, NKI/C3, CD10, MTF and PGP9.5, and were negative for S-100, GFAP and MelanA (Fetsh 2007).

Nerve sheath tumors were also composed of multinodular masses with myxoid matrix, however, the nodules contained Schwann cells in cords, nests and syncytial knot-like aggregates. This feature is not seen in neurothekeomas. Furthermore, the neoplastic cells in nerve sheath tumors are positive for S100, GFAP, NSE and CD57 (Fetsh, 2005).

Thus, it appears that NTKs and nerve sheath tumors have different clinicopathological profiles. However, there needs to be more investigation into these sets of tumors as the picture is still not entirely clear.

For example, Plaza et al (2009) analyzed 31 cases of cellular NTK and found that the tumors consistently stained with S-100A6, another antibody in the S-100 family that has been shown to highlight melanocytes and Schwann cells. Cellular neurothekeomas also stain with markers for cells of neuroectodermal origin such as NK1-C3 and PGP9.5, thus, cellular NTKs and nerve sheath tumors may be family members after all, if not, at least second cousins.