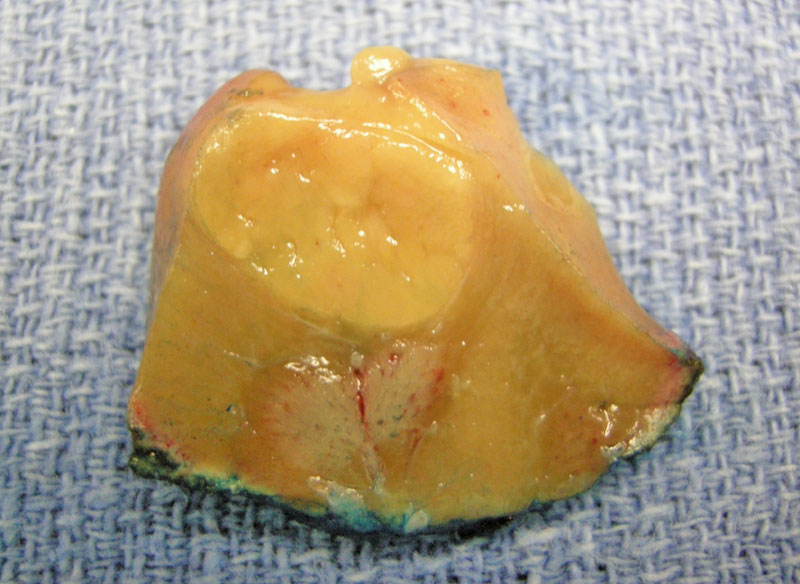 This resected portion of a chromophobe renal cell carcinoma demonstrates a yellow uniform appearance. The Sternberg text notes that chromophobe RCC can range from tan to light brown, but never golden yellow. However, our case was indeed golden yellow, so it may be simply an outlier. The gross appearance of this tumor can mimic that of an oncocytoma (tan, brown with a central scar). Thus, one cannot rely on gross appearance alone to distinguish between the two. Note that the presence of a central scar simply indicates that the neoplasm is slow-growing, as a central scar is seen in oncotyomas and some low-grade clear cell RCC.1

A touch prep demonstrates cells with granular eosinophilic cytoplasm and round nuclei. Your differential at this point may include oncocytoma or chromophobe RCC.

A closer view reveals cells with polygonal shapes and some nuclei show irregularly contoured membranes (located at the top of the image). These two features that favor chromophobe RCC rather than oncocytoma. Binucleate nuclei are also seen here, and are common to both entities.

Two variants of chromophobe RCC are recognized: classic (consisting of medium to large polygonal cells with pale, foamy, reticulated cytoplasm) and eosinophilic (consisting of smaller cells with granular pink cytoplasm). Both populations are seen here, but if the tumor consisted mainly of the eosinophilic type, it would be called the eosinophilic variant. These are no clinical differences between the two variants, but if sarcomatoid change (not demonstrated here) is found in chromophobe, this confers a more aggressive tumor. The architectural pattern is predominantly solid sheets of tumor cells separated by thin delicate fibrovascular septae. Other patterns such as trabecular, cystic and papillary may be focally admixed.

At the kidney interface, the tumor forms a pushing border. The lesional cells are again, a mixture of a classic and eosinophilic type. Note also, that the cell borders are quite prominent, leading some pathologists to describe them as

Areas of chromophobe RCCs often demonstrate mild to moderate cytologic atypia, resembling low grade squamous dysplasia. Note the perinuclear halos and raisinoid (wrinkled) nuclei. These two features are helpful in distinguishing chromophobe RCC from oncocytoma, which do not have perinuclear clearing and have round (not raisinoid) nuclei. Perinuclear clearing causes the organelles to be pushed to the periphery of the cell, thus, accentuating the cell membranes and imparting the

The cytogenetic aberrations seen in chromophobe RCC includes loss of chromosomes 1, 6, 10, 13, 17 and 21. Loss of the Y chromosome has also been reported.

IHC panels can be useful in distinguishing between renal epithelial neoplasms.2,3

This is an example of keratin 7 positivity in a chromophobe RCC.

While a rare nodule of tumor stained strongly for CD10, most other areas were essentially negative. Thus, while most are CD10 negative, it should be kept in mind that there can be variably positive staining for CD10 in some of these tumors.

Chromophobe RCC is typically negative for RCC antigen. The normal tubules (to the right) stain strongly, by comparison.

This particular tumor shows cytoplasm which is more clear than eosinophilic.

It is important to distinguish between these entities because oncocytomas are benign, whereas chromophobe RCC and conventional RCC are malignant. Certain microscopic features, cytogenetics and IHC stains can usually differentiate between these three entities.

Chromophobe RCC's genetic hallmark is the presence of multiple monosomies involving chromosomies 1,2,10,13,6,21 and 7 (in descending order of frequency). Loss of chromosomes 1 and Y has also been reported.1

A distinctive ultrastructural finding is numerous vesicles in the cytoplasm. In the eosinophilic population of cells, numerous mitochondria may be present, similar to oncocytoma cells.

Demographics are similar to that of conventional (clear cell) RCC, thus, is seen in middle-age adults (mean age of 59). At one institution, 58% of cases were asymptomatic, 30% presented with a mass and 19% presented with hematuria.1

Prognosis is favorable in that it is the least aggressive of the common renal cell carcinomas. Stage for stage, the chromophobe variant has a better prognosis than clear cell RCC. Note that sarcomatoid change occurs at about the same frequency as the other types of renal cell carcinomas and connotes a more aggressive behavior. No grading system has ever been validated for chromophobe RCC, including Fuhrman grading.