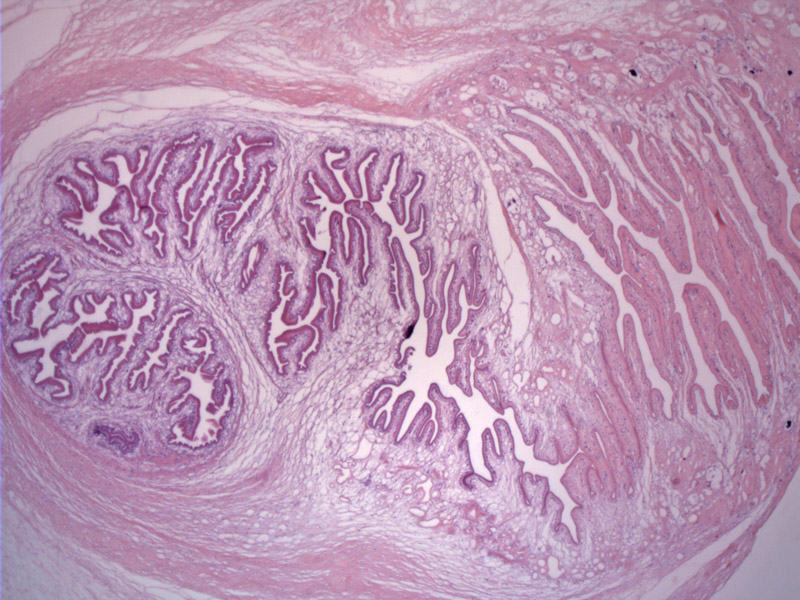 The scolex is intact
IMAGE DESCRIPTIONS

Case 1: Image an encysted larva within brain parenchyma. An invaginated scolex with suckers is not visible here, only the spiral canal.

The spiral canal with its infoldings is probably the most recognizable part of the larva.

Case 2: This case is from a dead parasite, which elicits a granulomatous inflammation around the cysticerci.

Outlines of the spiral canal can be appreciated.

Calcareous corpuscles (calcified bodies) are often seen in the parenchyma of tapeworms, as demonstrated here.

Neurocysticercosis is the most common helminthic infection worldwide and is due to cysts of Taenia solium in the brain producing symptoms. Note that cysticercosis should be distinguished from taeniasis, which refers to the carriage of the adult T. solium tapeworm in the intestine. Taeniasis occurs when human act as the definitive host and ingests pork meat infected with cysticerci.

Cysticercosis occurs when the human acts as an intermediate host via fecal-oral contamination. The ingested feces contains ova, which hatch in the small intestine and become larvae which disseminate into brain and muscle to become cysticerci. The cysts contain a single scolex (head) with four suckers. When the encysted larva dies, it elicits a granulomatous inflammatory reaction. The inflammatory reaction eventually becomes a dense collagenous capsule (Ellison).

Patients most frequently present with seizures, and a minority have severe headaches, focal deficits and signs of increased intracranial pressure. Often patients have been asymptomatic for years before clinical symptoms arise.

Imaging is nonspecific and often yields a broad differential diagnosis including astrocytoma, metastatic disease, arteriovenous malformation, tuberculosis, and other infectious etiologies (Moskowitz). The finding of a cyst containing a scolex - identified as a 3-mm hyperdense dot within a hypodense cyst cavity is uncommon to find but pathognomonic.

Neurocysticercosis is primarily found in countries with poor sanitation and hygiene. The tapeworm is endemic in Mexico, Central America, South America, Asia, and Africa.