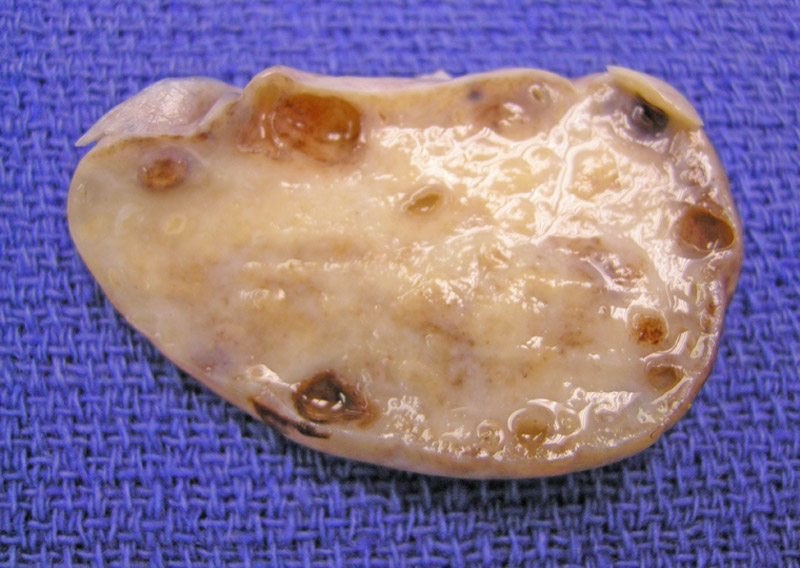 The ovary is diffusely enlarged with multiple subcortical cysts affecting the majority of the cortex.

Two back-to-back enlarged cysts are seen, with the cortex to the upper left.

Portion of follicular cyst wall is present (right) underlying a thickened cortex (left). Note that normal ovarian stroma should be blue and cellular, as seen in the stroma surrounding the cyst.

The ovarian cortex is markedly expanded by sclerosis, as seen by heavily collagenized (pink) stroma.

Presenting signs and symptoms are heterogeneous and vary over time, often making diagnosis difficult. A consensus group agreed that at least two of the following are necessary for diagnosis: oligoovulation or anovulation, elevated circulating androgen levels or clinical manifestations of androgen excess (hyperandrogenism) and polycystic ovaries by ultrasonography.

Many but not all of the women with PCOD are obese, some morbidly so. 30-40% of women show evidence of impaired glucose tolerance, and up to 10 percent have type 2 diabetes by their fourth decade. Hypertension develops in some women during their reproductive years. And lastly, an increased prevalence of endometrial hyperplasia and carcinoma in these women has been observed.2

Treatment depends on symptomatology. One of the most important aspects of treatment is to expose the patients to progesterone to reduce the long term risk of endometrial hyperplasia and carcinoma. Combined birth control pills effectively regulate pituitary gonadotropin secretion and diminish androgen production. Additionally, if predominant symptoms of androgenism exist, antiandrogens may be administered. If the patient's main issue is infertility, ovulation induction with clomiphene citrate is recommended. Added benefit to hormonal control, glucose tolerance, and fertility rates can be achieved with metformin therapy.

PCOS is a chronic endocrinologic disorder that continues to affect patients through menopause. Early recognition and treatment can reduce long term endometrial cancer rates, virilization, and help improve rates of hypertension and diabetes.

♣ Grossly, both ovaries are enlarged with the following three features: (1) multiple follicular cysts; (2) cortical rim of sclerotic stroma; (3) expanded stroma throughout the ovarian.