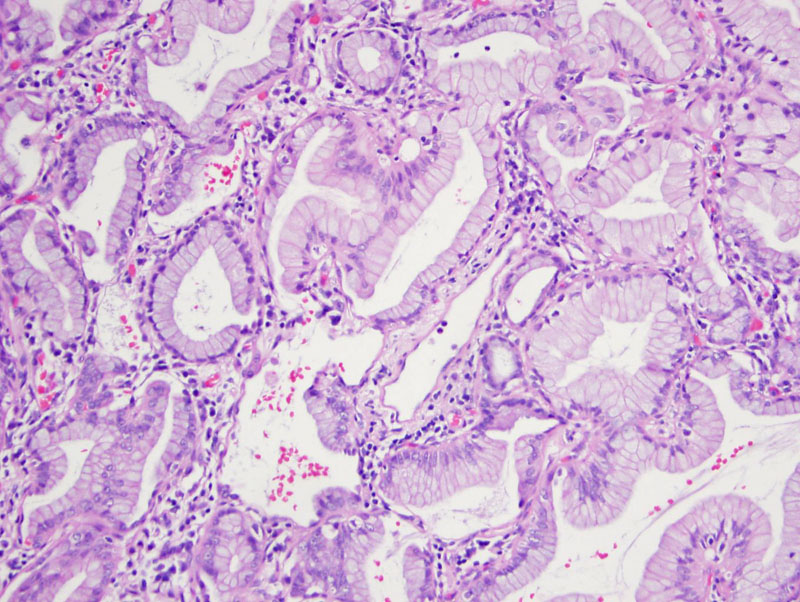 A single layer of mucin containing epithelial cells line the alveolar septae. Interestingly, in contrast to the immunophenotypic profile of most pulmonary neoplasms, mucinous BACs are often TTF-1 negative and may express CK 20 (Lau).

BACs are divided into mucinous, nonmucinous, and mixed types. In this tumor, extensive pale staining mucin is found within alveolar spaces, along with scattered macrophages, consistent with the mucinous subtype. Malignant cells follow along the pre-existing alveolar walls without stromal invasion, a feature known as lepidic growth.

Cytoplasmic mucin is appreciated in this more cellular area of the tumor. However, no solid growth is noted, as the tumor grows solely along the pre-existing alveoli which are clearly intact.

Mucin producing cells are clearly appreciated in this field. Nuclei are basally oriented, and lack any signficant atypia.

This mucinous BAC is cytokeratin 20 positive.

Bronchioloalveolar carcinoma (BAC), a variant of pulmonary adenocarcinoma, has distinct clinicopathologic features, response to therapy and prognosis. The tumor is peripheral in the lung and consists entirely of lepidic (defn: pertaining to scales or scale-like covering) growth of tumor cells, without pleural, stromal, or vascular invasion. Thus, BAC can be thought of as carcinoma in situ and if invasion were identified, one cannot employ BAC as a diagnosis, but rather invoke the term of adenocarcinoma with bronchioloalveolar features or mixed adenocarcinoma.

Interestingly, there are also gross differences between the two subtypes of BACs. Mucinous BAC often has a multinodular or pneumonia-like appearance grossly and on radiographic images, whereas nonmucinous BAC is usually a solitary mass (Zander). However, both types of BAC preserve the outlines of septa and alveoli since BAC is not an invasive neoplasm. Satellite nodules imitating a metastatic lesion are common as this tumor is believed to be spread aerogenously.

KRAS versus EFGR mutations: It is important to differentiate BAC (which represents <5% of lung cancers) from adenocarcinoma with BAC features (>20% of NSCLCs). The latter often show EGFR mutations, which have a good chemotherapy response rate (Kris). Mucinous, but not necessarily non-mucinous BACs, frequently lack EGFR mutations. The incidence of KRAS mutations is strikingly high, from 70 to 100%, in the mucinous subtype of BAC, although there is a lower incidence of KRAS mutations in non-mucinous BAC and in invasive lung adenocarcinomas.

BAC disproportionately affects women, non-smokers, and Asians (Raz). There is a weaker association to smoking compared to other lung cancers. Adenocarcinomas (including BAC), tend to be peripherally located lesions compared to squamous cell carcinomas and small cell carcinomas which arise centrally in the large airways (Zander).

Surgical resection. As mentioned above, adenocarcinomas with BAC features may respond well to epidermal growth factor receptor tyrosine kinase inhibitors gefitinib and erlotinib. However, there is insufficient data regarding the affect of EGFR inhibitors on "pure" BACs (Kris). However, for those with unresectable BAC, this chemotherapy may be a prudent option (Raz).

BACs may be more slowly growing than other types of lung cancers and has a better prognosis compared to other NSCLCs. However, after treatment, these tumors often recur in multiple areas of the lung.

BAC is a variant of adenocarcinoma with distinct clinical presentation, pathology and prognosis.

BAC is considered an in situ carcinoma. To be confident of the diagnosis, there must be no invasion into the lung parenchyma or interstitum.

There are two subtypes of BAC, mucinous and non-mucinous, with distinct gross and histologic features.