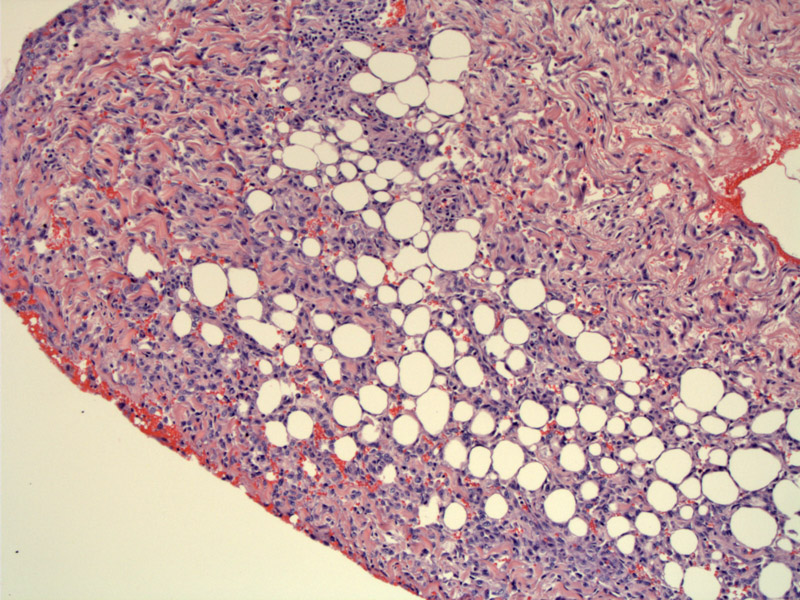 This tumor is composed of a cellular proliferation of atypical cells infiltrating the pleural area. In this area alone, the diagnosis of angiosarcoma seems very difficult to make.

A proliferation of endothelial cells creates some epithelioid cells and other more spindled appearing cells. The angiogenic nature of the neoplasm is still not obvious.

This area shows small loose aggregates of pleomorphic epithelioid cells. Some angiosaromas may be entirely or partly epithelioid in appearance.

In poorly differentiated angiosarcomas, there may be a solid growth of neoplastic cells and it may be difficult to visualize the vascular channels. Thus, performing IHC studies will be helpful.

Pleuropulmonary angiosarcoma is exceptionally rare. Angiosarcoma usually arises in the skin, soft tissue, breast and other viscera such as bone and liver. When encountering this neoplasm in the lung and pleura, one must first rule out metastases, especially from a cardiac primary (Fletcher).

Vascular tumors in the lung are rare, and examples include Kaposi sarcoma, angiosarcoma and lymphangioleiomyomatosis. In Kaposi sarcoma, spindle cells proliferate alongside slit-like vascular spaces with extravasated red blood cells. In angiosarcoma, proliferative endothelial cells - which are much more atypical and pleomorphic compared to Kaposi sarcoma -- create anastamosing vascular channels.

The best case scenario is a localized lesion which can be debulked; embolization of vessels feeding the tumor may be attempted. Radiation and chemotherapy have had little success (Kurtz).