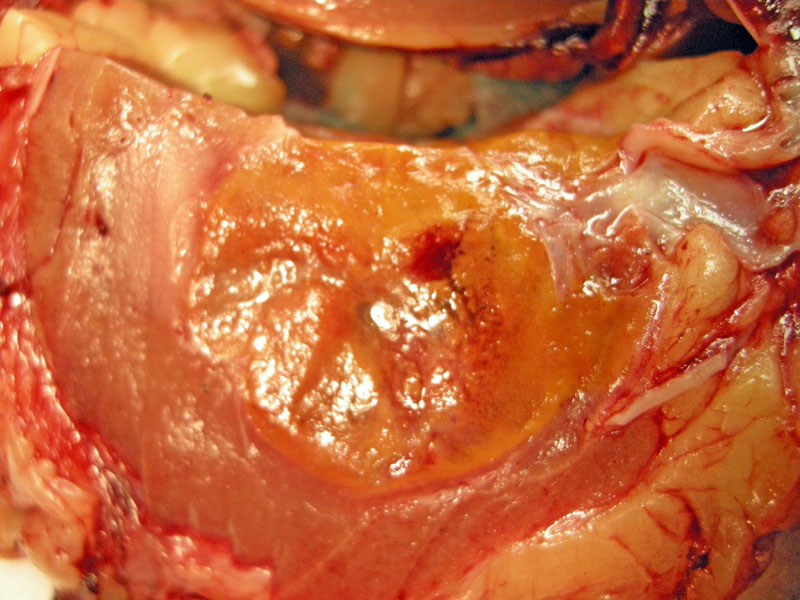 Oncocytomas are not always mahogany brown, but can be yellow or light brown.
IMAGE DESCRIPTIONS

Grossly, this oncocytoma demonstrates a yellow-brown cut surface. Bright yellow areas, or cystic change are not appreciated. The tumor has a well-circumscribed unencapsulated border. Oncocytomas are classically described as having a mahogany brown color, but in reality, they can range from yellow to brown. A stellate central scar is more commonly found in larger tumors.

More classic oncocytoma showing a mahogony brown color and areas of fibrosis. A distinct central fibrosing scar is not apparent in this example. Note that central scarring is related to size and can be seen in other slow-growing renal epithelial neoplasms such as chromophobe RCC and low grade clear cell RCC.2

Oncocytomas are composed of uniform cells with round nuclei and evenly dispersed chromatin.

The tumor is composed of polygonal to round cells with abundant, brightly eosinophilic, granular cytoplasm. The nuclei are round, regular with prominent nucleoli. In fact, even at this low power, the nucleoli can be seen.

The neoplastic cells often are arranged in solid nested pattern, with inconspicuous vasculature. Other common arrangements tubule and cystic formations.

Degenerate-appearing nuclei (enlarged and pleomorphic) are common focal features, however, there should not be mitotic figures or pleomorphism in the majority of the cell population.

IHC panels can be useful in distinguishing between renal epithelial neoplasms.3,4

Keratin 7 is negative, as compared to chromophobe renal cell carcinoma (which is keratin 7 positive).

CD10 is also negative, as compared to chromophobe renal cell carcinoma (which is CD10 positive).

E-cadherin stains the cell membranes of this oncocytoma.

Another case of oncocytoma demonstrates a tubuloacinar architecture, which features mildly dilated tubules.

Oncocytomas are benign epithelial neoplasms of the kidney and are thought to arise from intercalated cells of collecting ducts. Classically, they are characterized grossly by a mahogany brown color with a central scar and histologically by cells with abundant, eosinophilic, granular cytoplasm. Ultrastructural studies have demonstrated that these oncocytes are filled with abnormal mitochondria (similar to oncocytic cells seen in other organs like the thyroid).

Oncocytomas must be differentiated from more malignant renal epithelial neoplasms, namely, conventional renal cell carcinomas (especially the granular variant) and chromophobe renal cell carcinomas (especially the eosinophilic variant). IHC panels and cytogenetics are extremely helpful to differentiate between the entities, as noted in the above charts.

Because the diagnosis of oncocytoma connotes a benign entity that needs no treatment, the pathologist must adhere strictly to diagnostic criteria. Features that are rarely found include microscopic vascular invasion or microscopic extension into perirenal fat. Features that are impermissible are: mitotic figures, papillary architecture, clear or spindle cells, positive colloidal iron stain, prominent necrosis, gross vascular invasion or gross extension into perirenal fat.1,2

These tumors have a benign course and occurs in adults (peak age 50-80) with a male predilection (M:F ratio of 2:1). Usually discovered incidentally on imaging, but patients generally proceed to surgery because the diagnosis of renal oncocytoma cannot be made on imaging and biopsy alone.

Excellent as the tumor is benign.