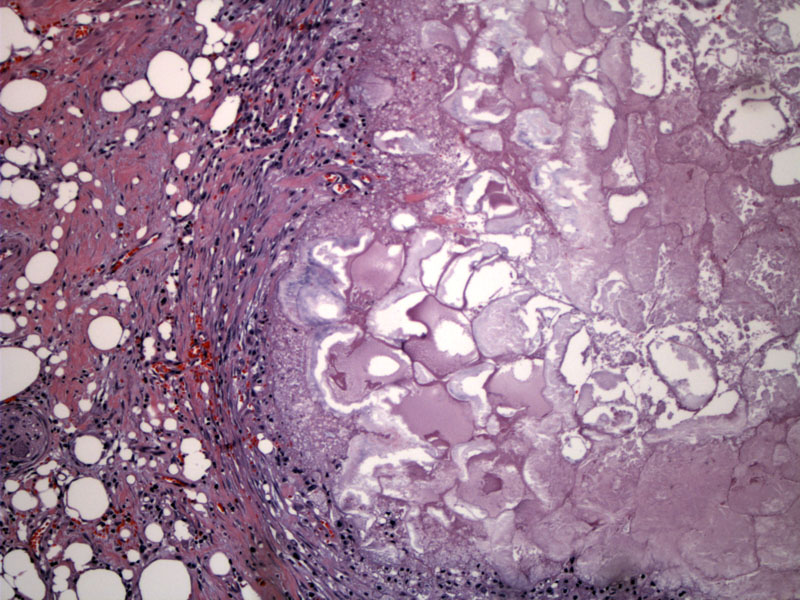 Necrotic acinar tissue is seen, with peripancreatic fat necrosis, a rim of inflammatory cells, and saponification. During or following a bout of acute pancreatitis, areas of fat necrosis appear at the interface between necrotic foci and fat tissue in and around the pancreas. These nodules become chalk-like as more calcium and magnesium soaps are added. The finding of saponification reflects the interaction of cations with free fatty acids released by the action of activated lipase on triglycerides in fat cells.

Acute pancreatitis is an uncommon acute inflammatory process that can be divided into two main types: acute interstitial pancreatitis (intraparenchymal inflammation, a mild form) and acute hemorrhagic pancreatitis (disruption of the microvasculature, a severe form).

Acute pancreatitis often begins with gradual or sudden pain in the upper abdomen that may raditate through the back. The pain may be mild at first and feel worse after eating. The pain is often severe and may become constant and last for several days. Nausea, vomiting and fever are also present. In the severe hemorrhagic form, blood may dissect into the retroperitoneum, causing a bluish coloration term the "Grey-Turner" or "Cullen" sign. Serum amylase and lipase elevation is a component, while serum calcium may be depressed in 1/4 of patients.

Intravenous fluids, antibiotics, and medication to relieve pain. Abstaining from eating or drinking is helpful to allow the pancreas to recover.

Complications of the severe form include cardiovascular collapse, renal failure, or sepsis. Prognostic factors to help predict disease severity are identified in the APACHE grading system. Parameters for disease severity include: age >55, WBC>16K, glucose>200, LDH>350, ALT>250 at admission. Findings at 48 hours such as hematocrit and serum calcium are also part of the assessment.