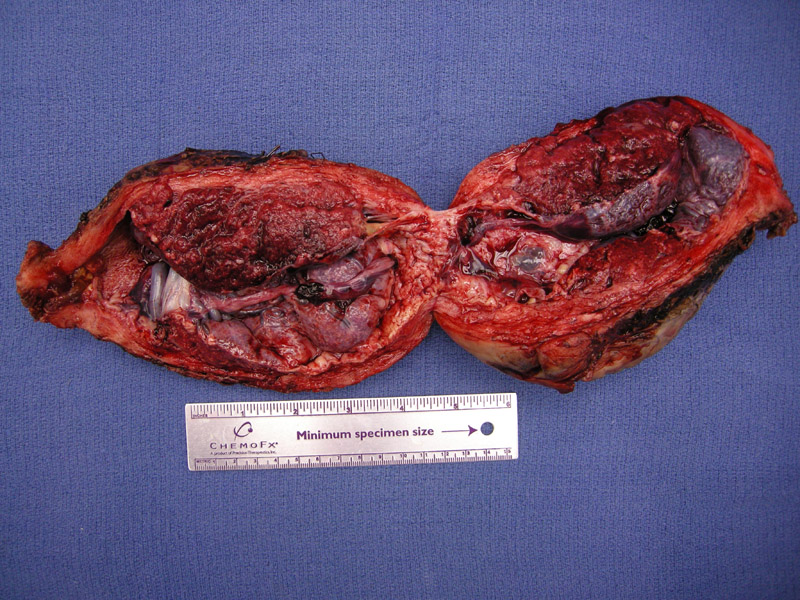 Bivalved uterus to show implantation of placenta on the myometrium.
IMAGE DESCRIPTIONS

Uterus is bivalved to show the placenta implanting directly on the myometrium.

A transmural section demonstrates placental accreta. The villous tissue may focally invade the myometrium (increta), however, this is difficult to detect grossly.

Anchoring villi are seen implanted directly onto uterine smooth muscle. Normally there is intervening decidua. The involvement is superficial.

Placenta accreta occurs when normal decidua fails to form in the endometrium, at least focally. As a result, the placenta directly adheres to the myometrium. Traditionally, this entity has been divided into three categories depending on how deeply the trophoblastic tissues invade: (1) placenta accreta: the chorionic villi implant on the myometrium (2)placenta increta: villous tissue invades into the myometrium (3)placenta percreta: the villi infiltrate the entire uterine wall.1

Accreta is limited to the superficial myometrium, while percreta refers to deeper involvement.

(1) the placenta may fail to separate from the uterus or is incomplelely delivered, resulting in significant postpartum bleeding.

(2) up to 60% of cases are associated with placental previa, where the placenta implants in the lower uterine segment, placing the woman at increased risk for antepartum bleeding and preterm delivery.1 A significant number of placental previa-associated accreta occur in patients with previous caesarean section scars.2 Placental percreta may invade into the bladder and present with hematuria.1

While in some cases of accreta hemostasis can be attained with curettage of the placental bed following delivery, a significant portion of cases require hysterectomy to attain hemostasis. In cases of percreta, uterine artery embolizations may be performed with the placenta left in situ until spontaneous detachment and passage.

Overall this disease is associated with a growing source of perinatal morbidity as the c-section rate has increased. Oftentimes the diagnosis is not made until the time of attempted placental delivery at which point the obstetrician is faced with performing a hysterectomy in the setting of catastrophic hemorrhage. When cases are recognized in advance, controlled deliveries may occur where placental delivery is avoided. This gives the advantage of obtaining surgical specialist support as well as leaving the option of attempting uterine artery embolizations and attempting uterine preservation.