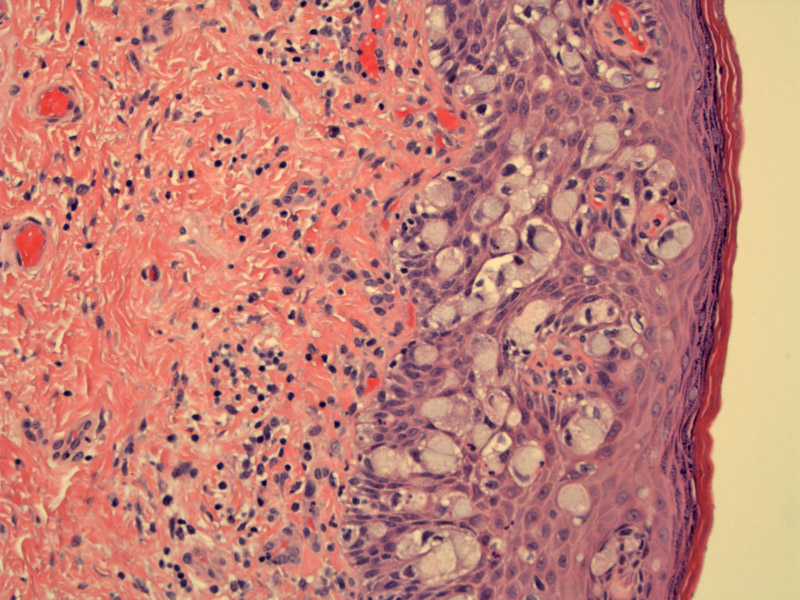 These large cells would be strongly positive for keratin 7 and CEA (supporting an adenocarcinoma).

Clinical Image: Erythematous lesion is fairly nonspecific and may be mistaken for a dermatitis.

In such instances, immunohistochemistry for CK7 or CEA (shown here) is highly useful to identify the intraepithelial malignant cells.

The pattern of spread can mimic melanoma, therefore, one might consider melanocyte markers.

EMPD does not arise in the breast, but in locations rich in apocrine glands such as the genital area and axilla. Furthermore, the majority of EMPD is a primary intraepidermal adenocarcinoma, that is, where the neoplastic glandular cells are posited to originate from intraepidermal apocrine ducts or possibly a pluripotent keratinocytic stem cell. The exact cell of origin is still unclear. Only ~25% are secondary processes (like mammary Paget disease), where there is an underlying adenocarcinoma from a deeper adnexal structure or an adenocarcinoma from Bartholin glands, urethra, bladder, vagina, cervix, endometrium, and prostate (Busam, Sandu, Lloyd). If the perianal region is the primary site, the risk of underlying colorectal carcinoma may be as high as 25-30%.

Although not common, EMPD must always be considered in patients with genital or perianal dermatitis.

Vulvar Paget disease may appear as a dermatitis (eczema, psoriasis), lichen sclerosis, thus, there may be a delay in biopsying and treating the lesion.

Key entities on the differential diagnosis include melanoma in situ (use melanocyte markers), and Bowen disease (positive for AE1:AE3). One must also look for secondary involvement from adjacent malignancies (secondary extramammary Paget disease). Most primary EMPD are CK7+/CK20- whereas EMPD secondary to a colorectal or urinary adenocarcinoma would be CK20+ (Busam).

Typically affects those in the 50-60 age range. Women are affected 4-5 times more often than men. Pruitis is usually the only presenting complaint. Classically the lesions are very erythematous and well demarcated. Over time the pruritis leads to excoriations and lichenification.

Because the disease usually extends beyond its visible margins, treatment includes wide and deep surgical resection comprising all the skin appendages. However there remains a high frequency of recurrences (15-62%), often irrespective for radicality of surgical excision (Preti). When associated with underlying invasive adenocarcinoma or stromal invasion, vulvar surgical approach must be integrated with inguino-femoral lymphadenectomy.

→The majority of EMPD cases are primary intraepithelial adenocarcinomas. Only a subset are associated with an underlying malignancy. In contrast to mammary Paget disease where it is a secondary disease process (colonization of the epidermis by an underlying ductal carcinoma of the breast).