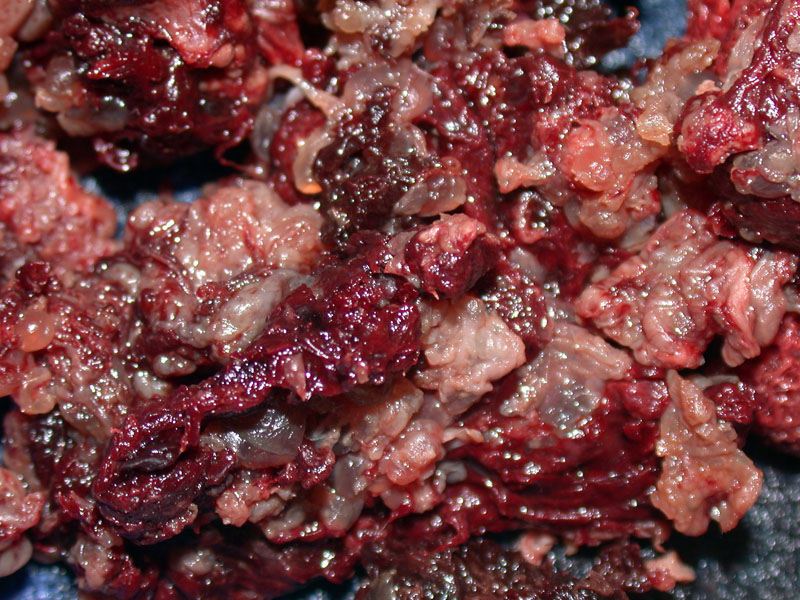 The villi are distended, edematous and show central cisterns.

Large avascular cisterns (absent fetal vessels) are appreciated throughout the entirety of the lesion.

In contrast, this is p57 staining of a normal placenta. Note the nuclear staining in many of the villous cytotrophoblast (arrow)

Hydatidiform moles (complete or partial) occurs in approximately 1 in 1000 to 2000 pregnancies in the US and Europe. However, it is much more common in the Far East (10 in 1000 in Indonesia).1 Distinguishing between complete and partial moles is important as the former carries a much higher risk of gestational trophoblastic disease.

Molar pregnancies are now detected much earlier in the pregnancy due to frequent use of ultrasound, therefore, the microscopic changes can be more subtle. Features of a 'classic' mole include: (1) marked villous edema with cistern formation; (2) all and not just part of the villi are edematous; (3) rounded or bulbous contour of villi; (4) circumferential trophoblastic hyperplasia; (5) cytologic atypia of trophoblasts; (6) exaggerated implantation site; and (7) absence of fetal parts.2

Cytogenetic analysis of complete moles yields a 46 XX chromosomal constitution in 90% of cases. Although diploid, both sets of chromosomes are contributed by the father as a result of duplication of a haploid paternal (23 X) penetrating an "empty ovum" lacking functional maternal DNA. A complete mole can also be formed by fertilization of the empty ovum by two sperms.

The p57 gene is paternally imprinted and expressed from the maternal allele, thus, staining for p57 can be extremely helpful in distinguishing between complete moles (p57 negative in the villous cytotrophoblasts) and hydropic abortuses (p57 positive in the villous cytotrophoblasts). Note that p57 is not helpful in distinguishing between partial moles and hydropic abortuses as both contain maternal genes and thus, both would demonstrate cytotrophoblastic cells that stain for p57.4,5

Tends to occur at the extremes of reproductive age (teens and between 40-50). The classic description is of a patient in early pregnancy with vaginal bleeding, vaginal passage of grape like clusters of tissue, and uterine size greater than expected for dates. More recently with the widespread availability of vaginal ultrasound most patients are detected earlier, when they first present with vaginal bleeding. Serum hCG level can be markedly elevated above that expected which may predispose the patients to hyperemesis gravidarum. Preeclampsia prior to twenty weeks gestation and bilateral enlargement of the ovaries, secondary to lutein cysts, may also be present.

Treatment is with uterine evacuation via dilation and curettage.

Complete moles have a much higher risk of developing persistent gestational trophoblastic disease (GTD) than partial moles. GTD is detected by elevated serum hCG that fail to return to normal levels after removal of the mole. Up to 20% of complete molar pregnancies develop GTD in the form of persistent mole or invasive mole in the myometrium; 2%-3% develop choriocarcionma.1 In Western countries, 50% of gestational choriocarcinomas develop after a complete hydatidiform mole.