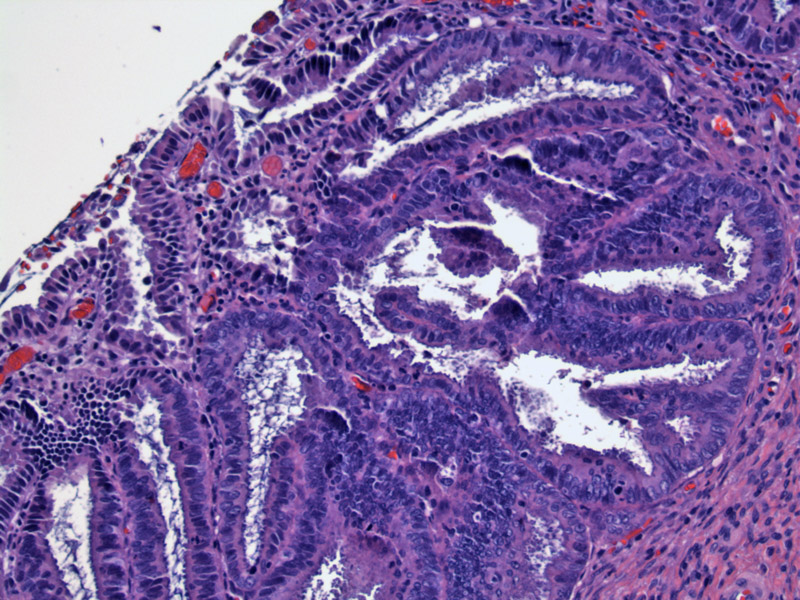 Glandular architecture is usually preserved, but glands may be crowded and exhibit increasing complexity such as papillary infoldings and cribriforming. The cells lining the glands are crowded, enlarged, hyperchromatic, stratified or pseudostratified. Nucleoli are usually inconspicuous but may be prominent. Mitotic figures (essential to the diagnosis) are usually located toward the luminal side of glands.

This case demonstrates the intestinal subtype, with prominent goblet cells. There are several histologic subtypes of ACIS. Although there is no difference in prognosis or tumor behavior among the various subtypes, they are important to recognize as the morphology of ACIS can be quite diverse.

Brisk mitotic activity must be present to diagnose ACIS. Mitotic figures are often located toward the luminal side of the gland and appear

Cytologically, clusters of hyperchromatic cells are seen. The nuclei have granular chromatin with inconspicuous nucleoli, although in this image, the nucleoli are prominent in some of the cells, which is also normal in ACIS.

Some of the cells demonstrate elongated nuclei. Size variation can be mild or moderate, but always with an increased N/C.

Another cell cluster demonstrates elongated nuclei, some of them located at the periphery give the cell cluster a feathered-edge appearance.

A different patient with ACIS shows a hyperchromatic small cluster of endocervical cells.

Other areas show elongated nuclei with hyperchromasia and crowding.

The most cases, the lesion originates at the squamocolumnar junction and is continguous from that point. However, ACIS occasionally may be multifocal or be situated proximal (higher) to the endocervical canal. It may involve the lower uterine segment and endometrial cavity. Approximately 50% of ACIS is associated with a squamous intraepithelial lesion and >90% have detectable high-risk HPV types (primarily type 16 and 18)(Fletcher).

Several subtypes of ACIS exist, and it is important to recognize that this lesion can have a diverse morphology. The endocervical subtype is most common, which resembles normal endocervical glands with superimposed dysplastic change. The endometrioid subtype resembles well-differentiated neoplastic endometrial glands -- the intestinal subtype exhibits less hyperchromasia and crowding, but is easy to recognize by the presence of goblet cells.

Tuboendometrial metaplasia (TEM), a benign change of endocervical glands, may exhibit crowding, hyperchromasia and nuclear enlargement. Thus, TEM must often be distinguished from ACIS. Mitotic figures are not found in TEM, and TEM is generally located in the upper cervical canal, whereas ACIS is typically located in the squamocolumnar junction. Furthermore, cells in TEM are often ciliated (recapitulating cells that line the fallopian tube). IHC panels will often help to separate the two. MIB-1 (an antibody against ki-67) is a marker of proliferative activity is often positive in ACIS, but negative in TEM. Vimentin also stains strongly in TEM, but not ACIS (Sternberg).

Presents at an average of age of 38, approximately 10 years earlier than invasive adenocarcinoma. Usually asymptomatic, but may present with abnormal vaginal bleeding. Since many women may still be in their reproductive years, treatment considerations include cervical conization (with close followup) rather than hysterectomy.

Note that Pap smears are less sensitive in detecting ACIS and invasive adenocarcinoma because there are many benign conditions that mimic the cytology of atypical glandular cells such as cervicitis, Arias-Stella reaction and tubal metaplasia. Furthermore, endocervical glands are further up the endocervical canal and thus, harder to sample thoroughly.

Thus, the category of AGUS “atypical glandular cells of undetermined significance” on cytology has been a source of much controversy in part due to sampling issues and interobserver variability. Although AGUS is reported in a small percentage (~1%) of all Pap smears, these cases often harbor a significant percentage of cervical neoplasia (Covell).

→ACIS may be reported as "atypical glandular cells of undetermined significance" on cytology.

→ACIS is often found in adjacent to invasive adenocarcinoma and 50% of ACIS may be associated with a squamous intraepithelial lesion.

Salani R, Puri I, Bristow RE. Adenocarcinoma in situ of the uterine cervix: a metaanalysis of 1278 patients evaluating the predictive value of conization margin status. Am J Obstet Gynecol. 2009 Feb;200(2):182.e1-5.