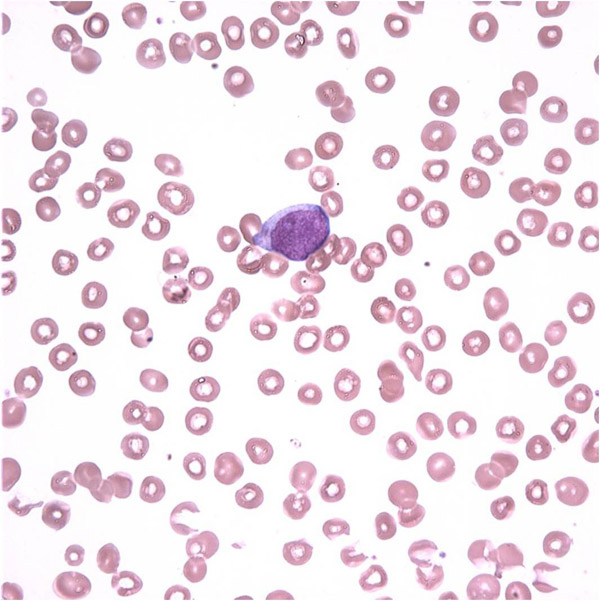 FISH analysis for t(15;17), although not favored in this case, is important to exclude. It is dual color dual fusion probe set. Normal pattern is two orange two green signals per cell (PML(15) – orange, RARA(17) – green), which is observed in this specimen.

POST CHEMOTHERAPY FINDINGS On therapy, bone marrow aspirate - increased number of mast cells, which were unmasked after blast population was eliminated due to chemotherapy

Post-therapy bone marrow core biopsy shows hypercellularity, but not quite as dense.

Same as previous, higher power. These are mast cells previously obscured by the dense blast population and are revealed only after chemotherapy effect. Mast cells are increased, cluster, and some show spindle shape morphology, which is an atypical feature.

CD25 is co-expressed in mast cells – expression is an atypical feature and a minor criterion for systemic mastocytosis.

To make this diagnosis, criteria for systemic mastocytosis have to be met as well as one of the hematological neoplasm in the WHO classification.

Systemic mastocytosis criteria (one major + one minor or at least three minor):

1. >25% of mast cells are spindle-shaped or atypical morphology (degranulated)

4. Serum total tryptase persistently > 20ng/mL (unless there is a clonal myeloid disorder present, in which case this parameter is invalid)

Patient is a female in her 30s who had non-specific general symptoms for a few months thought to be due to common viral infection. However, she was getting worse and eventually was admitted to the hospital. CBC and differential displayed blasts in the peripheral blood and a full work up for acute leukemia was initiated.

Currently, there is no cure for systemic mastocytosis. AML with t(8;21) is usually associated with a good response to chemotherapy and a high complete remission rate when treated with high dose cytarabine in the consolidation phase.

Systemic mastocytosis may have an indolent course with a normal life expectancy or very aggressive, with only few months survival. AML with t(8;21) appears to have a good prognosis. However, presence of c-kit mutation may adversely affect the prognosis. Whether these two conditions have an independent or synergistic effect on prognosis remains to be seen.

WHO Classification of Tumours of Heamatopoietic and Lymphoid Tissues, 2008, 4th edition