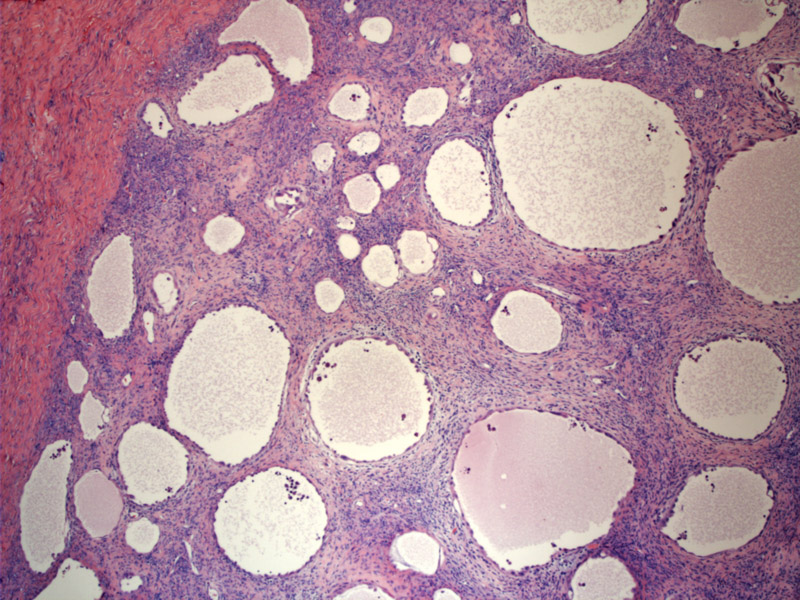 The tumor is generally circumscribed and surrounded partially by a smooth muscle capsule.
IMAGE DESCRIPTIONS

Mixed epithelial and stromal tumors typically are circumscribed. The mass is located centrally in the kidney and can extend into the renal pelvis to involve the ureter. The tumor is composed of a mixture of cysts and tubules (epithelial component) surrounded by dense proliferative stromal cells (stromal component). In this image, a well-demarcated tumor is seen here with variably-sized round cysts in a cellular stroma. Note that there is no complexity to the cyst lining in this tumor, however, in some tumors, the lining may form papillary tufts

The lining of the cysts vary, ranging from attenuated (as demonstrated here), to cuboidal or columnar cells; at times, the lining may form papillary tufts. Some of the cystic lumens may contain serous acellular fluid.

Cysts are embedded in a densely cellular stroma with a woven pattern resembling ovarian stroma. The stroma can also be hypocellular, fibrotic, myxoid or collagenous. The spindle cells are positive for actin and desmin, with nuclear positivity for ER and PR.

The epithelial lining of the cysts can range from flattened, as seen here, to more cuboidal and hobnailed. The cytoplasm ranges from clear to eosinophilic and vacuolated. A hint of hobnailing is seen here, with nuclei protruding into the cystic lumen. There is some reactive atypia, however, neither the epithelial nor the stromal components of this tumor should exhibit any significant atypia or mitotic activity.

CD10 shows positivity in the stroma with periglandular accentuation.

These tumors have an estrogenic influence, as evidenced by strong ER staining of stromal cells.

Keratin AE1/3 highlights the epithelial component. Some tumors show co-expression of the epithelium with vimentin.

The stroma is also variably positive for smooth muscle actin.

Mixed epithelial stromal tumor (MEST) is a recent addition to the WHO 2004 renal tumor classification. It is a rare benign tumor composed of stromal and epithelial elements. Due to its predilection for women, an estrogenic influence in the pathogenesis of this tumor has been suspected. IHC studies support this theory, as the spindle cell component demonstrates nuclear positivity for estrogen and progesterone receptors.

There is a striking similarity between MEST and cystic nephromas (CN) in terms of demographics (sex predilection, age distribution) and morphological features. Both MEST and CN are composed of stromal and epithelial elements, ovarian-type stroma and positive nuclear reactivity for ER and PR. Thus, Turbiner and colleagues (2007) have proposed the unifying term "renal epithelial and stromal tumors" (REST) to emphasize that MEST and CN may be spectrums of the same pathologic lesion.4

Mean tumor size is 6 cm and the tumor shows a striking female preponderance (6:1). Most commonly diagnosed during the peri-menopausal years with a mean age of 46. Presents with a flank mass, hematuria or symptoms of urinary tract infection. 25% of tumors are detected incidentally.1

Excellent. Recurrences and metastases have not been reported.