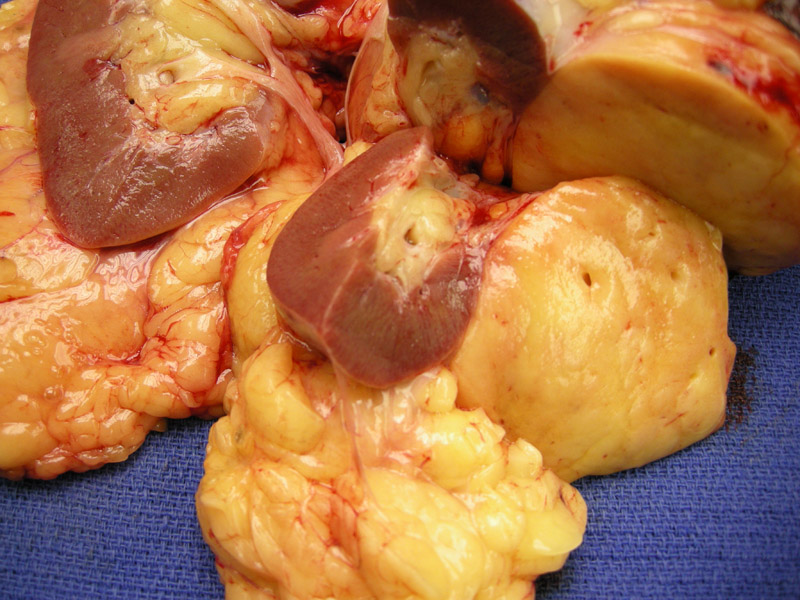 Case 1: In general, angiomyolipomas are lobulated, well-circumscribed masses that are golden yellow due to the adipose component. However, the yellow can be variably admixed with tan or pink depending smooth muscle or vascular component in the tumor. Hemorrhagic foci may be present. This image demonstrates an angiomyolipoma composed predominately of fat.

The microscopic images of the above tumor shows mature fat, intervening vessels and scant smooth muscle. Note the prominent blood vessel on the left. The blood vessels in angiolipomas are a helpful diagnostic feature, as they are generally thick-walled, hyalinized, lack an internal elastic lamina. Though not clearly demonstrated here, whorls of smooth muscle cells often appear to emanate from these abnormal vessels. Admixed with the smooth muscle cells are the perivascular epitheliod cells (PEC). PEC are very difficult to differentiate from the surrounding smooth muscle cells, but some say they may have larger, more bizarre hyperchromatic nuclei.2

This image demonstrates the kidney-tumor interface, with abutting normal kidney. The tumor is nonencapsulated, with a broad pushing border.

Case 2: This angiomyolipoma also shows an extensive fatty component as well as increased vascularity and a more solid component, related to heavier representation by the myoid and vascular components.

And as expected, by histology, this angiomyolipoma does show extensive smooth muscle proliferation. In such instances, the tumor may resemble other spindled-cell tumors such as leiomyoma or leiomyosarcoma, especially since the smooth muscle cells can display nuclear atypia. Also, mitotic figures are not uncommon. Therefore, extensive sampling to search for the adipose and vascular component may be necessary, as well as performing IHC panels.

Other areas of the above tumor also exhibited areas of secondary sclerosis.

Angiomyolipomas is a benign tumor composed of an intimate admixture of abnormal vessels, smooth muscle and fat. These components can be present in varying proportions, therefore, the tumor can be predominately fat, or predominately smooth muscle. Although they are mainly found in the kidney, angiomyolipomas can be found in other anatomic locations such as liver, lungs and retroperitoneum.1

Angiolipomas are part of a larger family of tumors called PEComas, tumors thought to originate from perivascular epitheliod cells. Entities include angiomyolipoma, epithelioid angiomyolipoma, clear cell "sugar" tumor and lymphangioleomyomatosis. PEComas are characterized by "immunohistochemical evidence of dual myomelanocytic differentiation"3 , as the majority stain positively for smooth muscle and melanocytic markers. Angiomyolipomas stain with SMA and HMB-45, and ~50% stain for Melan-A; epithelial markers such as cytokeratins are negative.

Unlike a related entity epitheliod angiomyolipoma, angiomyolipomas are benign. A rare complication is retroperitoneal hemorrhage, as the tumor can be very vascular.