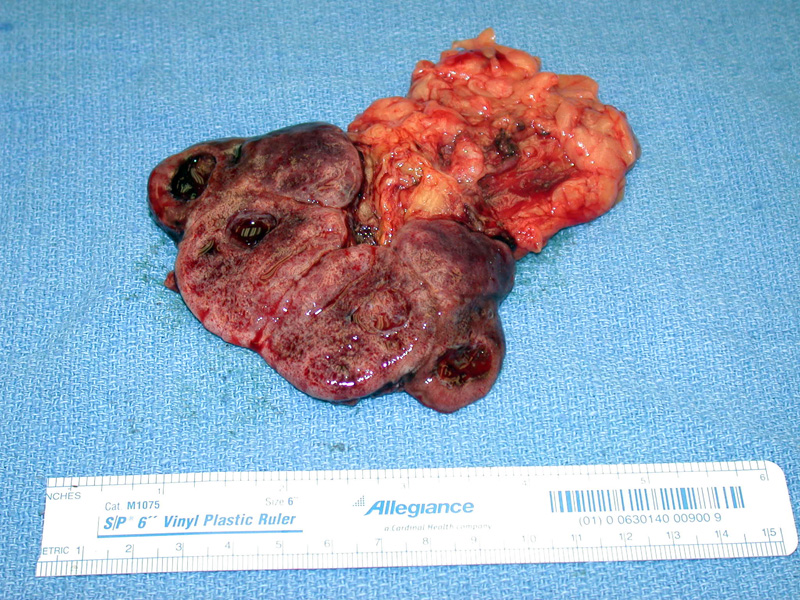 Case 1- Grossly, pheochromocytomas are generally firm, solid, tan to red masses that are circumscribed. Most range from 2-10 cm and weight between 50-100 g (Kumar). Secondary degenerative features such as hemorrhage, cyst formation and necrosis can be found in larger tumors. This 53 gram pheochromocytoma in our institution shows a tan-brown surface with demarcated areas of hemorrhagic cyst formation. This tumor is also soft with focal cystic change and hemorrhage.

Closer inspection reveals a vaguely lobular appearance. The tumor is highly vascularized, and microscopy will demonstrate a rich vascular network surrounding the nests and cords of malignant cells.

Case 2 - A normal yellow nodule of adrenal gland is seen abutting this 225 gram, 9.5 cm pheochromocytoma. There is marked cystic and necrotic degeneration, and clearly the tumor shows marked hemorrhage.

The chromaffin cells are arranged in alveolar nests, diffuse sheets or in trabeculae. In this image, the tumor cells are loosely arranged in broad anastamosing cords. A rich vascular network runs within the fibrous hyalinized stroma.

The tumor cells are polygonal, with a moderate to abundant amount of finely granular cytoplasm. Ultrastructural studies reveal that the cytoplasm is filled with granules containing catecholamines and various hormone peptides. The nuclei are round or ovoid, with a speckled chromatin pattern and visible nucleoli.

Many pheochromocytomas can demonstrate bizarre cytomorphology as seen here. Pleomorphism is not a prognostic factor in pheos. Only the presence of metastasis separates the benign from the malignant.

This different case of pheochromocytoma extends into the surrounding capsule to gain access to a vascular structure.

Occasionally, clear cells predominant in pheos, placing clear cell carcinoma of the kidney and adrenal cortical carcinoma into the differential.

Pheochromocytomas are tumors originating from chromaffin cells located in the adrenal medulla. The term chromaffin is derived from the fact that the tissue/tumor will turn brown if incubated with potassium dichromate due to oxidation of the catecholamines (chrom = color, affin = affinity). Pheochromocytomas generally synthesize catecholamines, thus, presenting clinically with hypertension and other symptoms of sympathetic activation. However, pheochromocytomas can also produce peptide hormones such as ACTH and present with Cushing syndrome or hyperglycemia.

~0.1% to 0.3% of patients with hypertension have a pheochromocytoma, however, it is important to recognize this entity because it is surgically curable, and if unrecognized, the hypertensive episodes can be fatal (Kumar).

Many pheochromocytomas can demonstrate significant pleomorphism including the presence of bizarre multinucleated giant cells. Mitotic figures are frequently found. Note, however, that wildly atypical histology is NOT a prognostic factor. These features are commonly found in benign pheochromocytomas (confined to the adrenal gland), whereas paradoxically, tumors with monotonous morphology tend to be associated with a more aggressive behavior. Therefore, most authorities stress that the only definitive diagnosis for a malignant pheochromocytoma is the presence of metastases (Kumar)

The chromaffin cells will stain positively for NSE and neuroendocrine markers such as chromogranin and synaptophysin. Sustentacular cells, clustered with the chromaffin cells, may be difficult to identify on H&E, but will be highlighted by a S-100 stain.

Many characteristics of pheochromocytomas can be remembered using the "rule of 10s"1 :

The classic presentation is that of episodic hypertension accompanied by tachycardia, tremor, sweating and palpitations. However, 2/3 of patients have chronic, sustained elevation of blood pressure (Kumar). All patients will demonstrate increased urinary excretion of free catecholamines and their metabolites such as vanillylmandelic acid (VMA) and metanephrines.

Generally excellent as only 10% are malignant. Note that malignancy is defined only by metastases, as bizarre cytologic features are common in benign tumors.