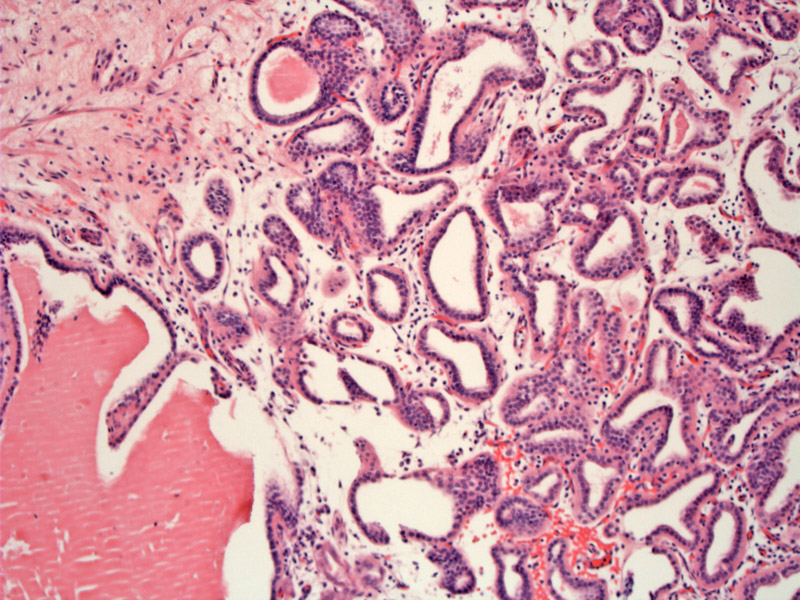 Nephrogenic adenomas (NA) can have an endophytic component characterized by small tubular structures packed closely together (reminescent of developing kidney tubules). The lamina propria is often edematous. Colloid-like material can often accumulate inside the cysts.

The tubules are usually small and round, but may also be convoluted and cystically dilated. An important feature of NA is that the tubules are lined with a single large of cuboidal cells that have scant cytoplasm. These lesions lack a basal cell layer.

Nephrogenic adenoma (NA) is commonly referred to as metanephroid metaplasia or nephrogenic metaplasia. Historically, NA was believed to be a benign neoplasm that recapitulated developing kidney tubules microscopically, thus, it was given the name of "nephrogenic adenoma".

Nephrogenic adenoma may arise anywhere from the renal pelvis through the urethra with the most frequent location being the urinary bladder.

Authorities subsequently discarded this neoplastic theory in favor of a reactive process. NA was believed to be a metaplastic change of the urothelium in response to injury. Evidence that supported this metaplasia theory included: (1) NA is often preceded by some form of insult to the genitourinary system such as chronic infection, calculi or instrumentation, and (2) NA is often seen in conjunction with other metaplastic and reactive changes such as cystitis cystica or cystitis glandularis.

New studies have come to light, however, that strongly favor the "seeding" theory. Cells from the distal convoluted tubules of the kidney slough off and implant into a damaged or denuded urothelium (not completely unlike implants from ovarian serous tumors). An elegant study conducted by Mazal (2006) on renal transplant patients have demonstrated that the karyotype of nephrogenic adenomas matched those of the donor. Specifically, female transplant recipients of male donor kidneys had nephrogenic adenomas of XY karyotype, and vice versa (Mazal, Rahemtullah)

Although NA has no malignant potential, the interest in this entity is due to its ability to mimic malignant tumors such as prostatic adenocarcinoma (especially if the NA is located in the prostatic urethra) and clear cell carcinoma of the lower urinary tract.

The cells are epithelial in nature and thus, will stain for AE1/AE3 and CAM 5.2. Although some NAs will resemble vascular structures, they will be negative for endothelial markers such as CD31 and CD34. Note that occasionally, NAs can express AMACR and PSA (as prostatic adenocarcinoma can be on the differential). NAs also express renal lineage transcription factors PAX2 and PAX8, which are helpful markers diagnostically (Tong).

It can occur at any age, and in adults, there is a strong male predominance. However, in children, there is a 3:1 female predominance. NA is located predominantly in the bladder (80%), however, it can be found in any urothelial lined organ from the renal pelvis to the urethra (15%). Those located in the female urethra have a predilection to occur in a urethral diverticulum (Rahemtullah).

Mostly, the lesions are incidental findings, however, they can reach a size of up to 4 cm. Grossly, two-thirds are papillary, while the rest are polypoid or sessile (Fletcher).

-- Also positive for PAX-2, in all componenents