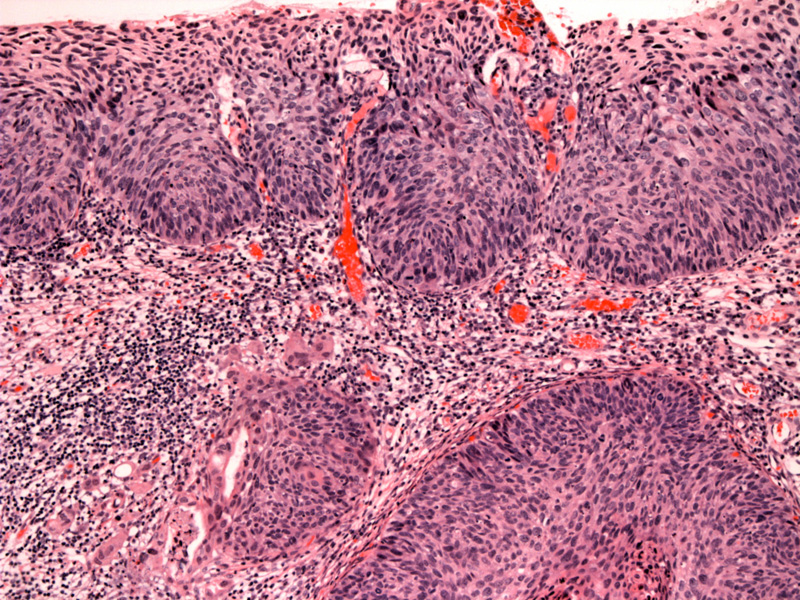 SIngle and clusters of cells are seen infiltrating into the dermis.
IMAGE DESCRIPTIONS

Due to the orientation of this specimen, high grade neoplastic epithelium (VIN) is seen on both top and bottom of the image. The central 'nest' is most likely a tangential cut of the epithelial base. However, a small area of single cell infiltration is seen around the nest. The invasive cells show increased eosinophilia in the cytoplasm.

Superficially invasive squamous cell carcinoma accounts for 7-17% of squamous cell carcinomas in the vulva. There is no universal consensus for the criteria of 'superficial' invasion. The AJCC divides T1 tumors (< 2 cm in greatest dimension) into T1a or T1b based on depth of invasion (< 1 mm or > 1 mm). Similarly, the ISSVD proposes that a superficially invasive tumor be defined as less than 2 cm in greatest dimension and with a depth of invasion no greater than 1 mm.

Why the obsession with these micromeasurements? Tumor thickness and depth of invasion carries significant prognostic and clinical implications. For example, lesions less than 2 cm in greatest dimension has a 19% risk of nodal metastasis and for lesions between 3-4 cm, the risk increases to 54%.1

Clinical characteristics are identifical to that of vulvar intraepithelial neoplasia (VIN). Please visit our case for VIN, which describes both the 'classic' VIN and 'differentiated' VIN.

For tumors with depth of invasion at no more than 1 mm, a groin lymph node dissection is not recommended and the patients can simply be treated with wide local excision.1