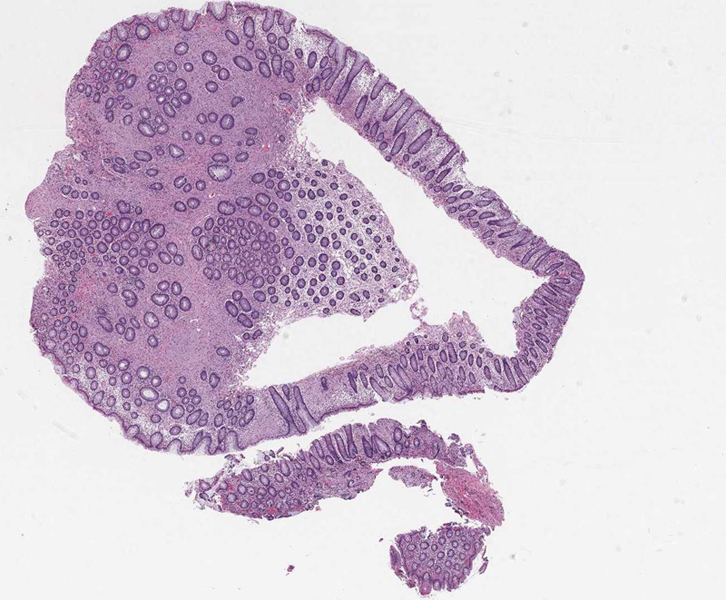 A low power image demonstrates a replacement of the lamina propria by stromal cells. Architectural distortion is minimal.

A proliferation of spindled cells have expanded the lamina propria.

A higher power image of ganglion cells and associated stroma (spindled cells in a fibrillary matrix) streaming between colonic glands.

Ganglioneuromas, whether solitary/sporadic or as part of ganglioneuromatosis polyposis, demonstrate a fairly well-demarcated of proliferation of spindled cells under normal epithelium. Ganglion cells are not evident at this power. In diffuse ganglioneuromatosis (not seen here), there would be a permeative and poorly demarcated proliferation of spindled cells that may involve the entire bowel wall and cause significant architectural distortion. One may also find expansion and hyperplasia of the enteric plexuses.

Polypoid ganglioneuromas consists of small sessile or pedunculated polyps which are usually solitary or few in number. Nerve ganglion cells and spindled stromal cells are found in nests in the mucosa and submucosa, usually without significant disarray in the architecture of the glands. These solitary polyps are not associated with a hereditary syndrome; they are asymptomatic and usually found incidentally.

Can occur anywhere in the GI tract, but most common in the left colon and rectum. Presents endoscopically as solitary (or very few) polyps sporadic cases and numerous (20 or more) polyps in ganglioneuromatous polyposis. In contrast, diffuse ganglioneuromatosis, which arises in the muscularis propria and presents as a poorly demarcated whitish mural thickening +/- stricture, can involve up to 17 cm of colon wall.2

Excellent. Although some hamartomatous polyposis syndromes (Peutz-Jeghers syndrome and juvenile polyposis sydnrome) carry an increased risk for intestinal cancer, no such connection has been established for ganglioneuromatosis. Patients with diffuse ganglioneuromatosis and MEN IIb or NF1 may have co-morbidities associated with these hereditary syndromes such as endocrine abnormalities and other neoplasms.