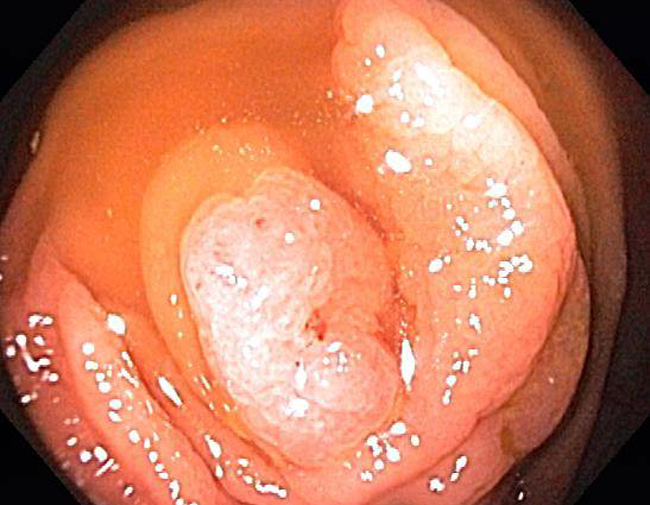 A discrete sessile lesion is seen in the appendix.
IMAGE DESCRIPTIONS

A microscopic image of the biopsy demonstrates hyperplastic glands. The glands are elongated with a serrated profile. Note that adenomatous change was lacking, thus, distinguishing this lesion from an adenoma. Unfortunately, there is knife chatter artifact distorting this image, however, due to the rarity of this lesion, another image is not available at this time.

It is fascinating to note that the presence of hyperplastic lesions in the appendix is significantly associated with the co-existence of adenocarcinoma exists elsewhere in the GI tract. In a study conducted by Younes, 17 out of 23 appendices with mucosal hyperplasia were associated with colonic adenocarcinoma (located predominantly in the right colon).2

True incidence may be underestimated as they are usually not seen endoscopically and are thus discovered on appendectomy done for other reasons. Furthermore, it is common practice in pathology to submit several representative sections of an appendix and thus, the entire mucosa is not usually examined.

Although further research needs to be conducted in this area, it appears that epithelial neoplasms of the appendix exhibit a similar dysplastic-neoplastic sequence found in the colon. Hyperplastic polyps may evolve into serrated adenomas, which then may progress into invasive adenocarcinomas (most often, the mucinous type). Hyperplastic and adenomatous lesions in the appendix is much more aggressive than those found in the colon, and as mentioned above, hyperplastic lesions in the appendix is curiously associated with colonic adenocarcinomas.

2 Younes M, Katikaneni PR, Lechago J. Association between mucosal hyperplasia of the appendix and adenocarcinoma of the colon. Histopathology. (1995)Jan;26(1);33-7.

Please visit our other cases for epithelial neoplasms for the appendix: