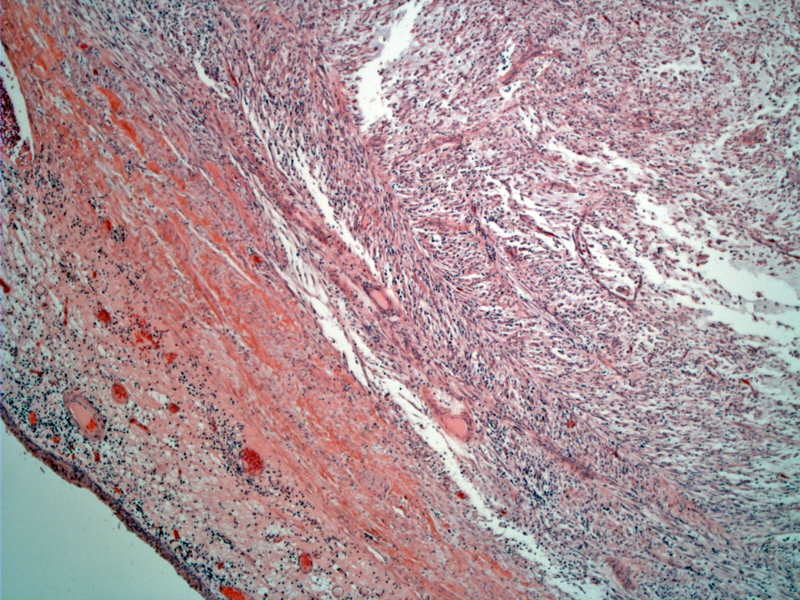 IMT is characterized by a myofibroblastic spindle cell proliferation resembling that of a fibroblastic tissue culture. The stroma may be edematous or myxoid. Collagen deposition may be present and an inflammatory infiltrate is usually quite prominent. A delicate network of vessel may be seen in the background (Zhou).

Inflammatory myofibroblastic tumors (IMT) are rare lesions most commonly described in the lung and abdomen of children and young adults. Cases of extrapulmonary IMT have been documented in a variety of locations including liver, kidney, retroperitoneum and soft tissues of the head and neck.

Lesions designated as postoperative spindle-cell nodules and pseudosarcomatous myofibroblastic proliferations have similar if not identical morphologic features. Postoperative spindle-cell nodule represent cellular spindled lesions that appear after surgical instrumentation (e.g. transurethral resection of a bladder tumor). It was evident that this type of lesion could arise in the bladder without history of prior surgery, and thus, these lesions are now designated pseudosarcomatous myofibroblastic tumor.

There is much controversy among experts whether these tumors are identical to IMTs of childhood, variants of the IMTs or unrelated tumors. The unifying themes among these tumors include the following: (1) at least a subset demonstrate positivity with anaplastic lymphoma kinase (ALK) staining by IHC (2) a subset demonstrate rearrangement (translocation) of the ALK gene located on chromosome 2p23 by FISH and (3) a spindled morphology with an inflammatory infiltrate.

Hirsh et al studied 27 cases of pseudosarcomatous myofibroblastic proliferations and concluded that PMPs are separate entities from IMTs of childhood. For example, in their study, PMPs do not show consistent ALK gene rearrangements (6 cases were examined by FISH and all were negative for ALK translocations) and furthermore, Hirsh purported that IMTs exhibit a more robust lymphoplasmacytic infiltrate and are more likely to recur and carry a low but real risk of metastasis.

Harik et al studied 42 cases of PMPs and also concluded that PMPs are behaviorally different from IMTs of childhood. Harik notes that IMTs of childhood often have associated constitutional symptoms and it is a tumor with borderline malignancy. In contrast, PMPs carry an excellent prognosis and minimal risk of recurrence or metastasis. In this study, however, the ALK-1 translocation was found in 4/6 cases.

It is important to recognize these tumors in order to distinguish them from leiomyosarcomas, rhabdomyosarcomas and sarcomatoid urothelial carcinomas.