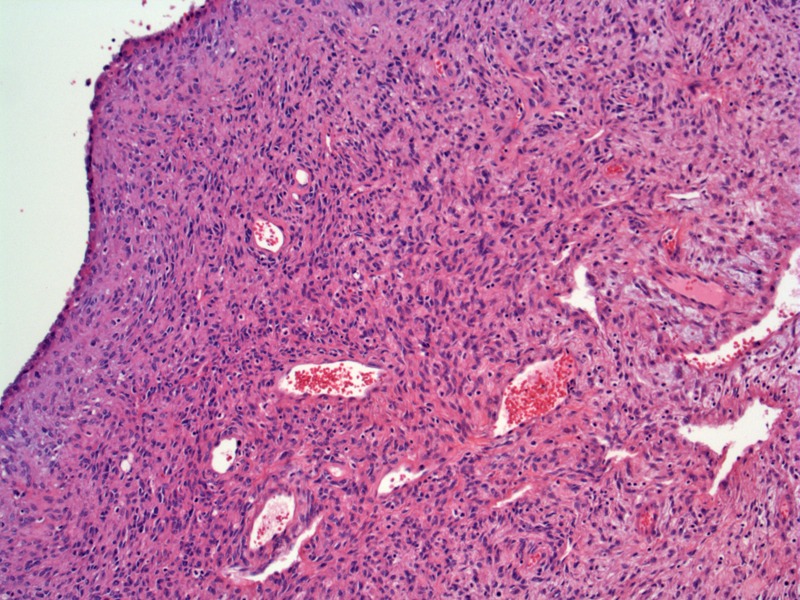 Case 1: Multiple dilated glands are set against a cellular stromal background. Criteria for diagnosis include periglandular collaring of malignant stromal cells around glands, mild to moderate nuclear atypia of stromal cells and greater than 2 mitotic figures per 10 HPF.

Broad polypoid projections of stromal cells into dilated lumens are reminiscent of a phyllodes tumor of the breast. The lining of these papillary fronds (which are continuous with the glandular lining) usually consist of endometrioid-type cells. However, the glandular lining may also contain mucinous, squamous, hobnail-type epithelial cells.

Periglandular collaring is highly characteristic -- this is a condensation of stromal cells beneath the glandular epithelium. Malignant stroma in this area of condensation typically display higher cellularity and atypia. Stroma in other parts of the tumor are less cellular and the atypia may be very subtle.

Case 2: Here's a more subtle case of a low grade adenosarcoma. Note the obvious condensation of stroma around the central cluster of glands.

Only scattered glands exhibited this periglandular collaring. The polyp was quite large (12 cm in greatest dimension).

The stroma in these condensed areas are definitely more cellular, with mild atypia and spindling. Although no mitotic figures are seen, it is prudent to classify this entity as an adenosarcoma rather than adenofibroma.

Mixed mullerian tumors of the uterus include entities such as adenofibromas, adenomyomas, atypical polypoid adenomyoma, adenosarcoma, carcinosarcoma. Adenofibromas and adenomyomas (essentially benign) lie at one end of the spectrum while carcinosarcomas (highly aggressive) at the other end. As their names suggest, these tumors are composed of epithelial and stromal elements.

Low grade Mullerian adenosarcomas (henceforth referred to as simply adenosarcomas) are rare, represently 8% of all uterine sarcomas (Nucci). The tumor is composed of benign (but sometimes atypical glands) and a stromal component demonstrating low-grade sarcomatous features. Most adenosarcomas exhibit an average of 9 mitotic figures per 10 HPF. However, in the presence of other sarcomatous features such as periglandular cuffs (stromal concentration around glands), hypercellularity and stromal cell atypia, only 2 mitotic figures per 10 HPF is necessary to secure the diagnosis of adenosarcoma (Gallardo).

Heterologous mesenchymal elements are found in 20-25% of cases. These elements may consist of small foci fat, cartilege or rhabdomyoblasts. Occasionally, confluent areas of embryonal rhabdomyosarcoma will occupy a large portion of the stroma (Nucci).

Typically occurs in uterus of post-menopausal women (median age 58); 30% of cases occur in pre-menopausal women (more frequently in extrauterine locations such as the cervix). Presents with abnormal vaginal bleeding and pelvic pain. In half the cases, the tumor protrudes through the external os. Associated risk factors include hyperestrinism (including tamoxifen therapy) and prior radiation (Nucci).

The tumor ranges from 1-20 cm and may fill and distort the entire uterine lumen. The cut surface is soft, spongy (due to numerous cystic structures) and maybe clefted with a 'leaf-like' outline, as adenosarcoma is reminiscent of a phyllodes tumor both grossly and microscopically. Invasion of myometrium is rarely detectable grossly.

Hysterectomy with bilateral salpingo-oophorectomy is the mainstay of therapy. Overall, as the disease is rare, adjuvent radiation therapy and/or chemotherapy has not been adequately evaluated, with some studies containing small numbers of patients showing benefit and some showing none.

Myometrial invasion and sarcomatous overgrowth are the two indicators of malignancy. Vaginal or pelvic recurrence arises in approximately 25% to 30% of patients at 5 years and is associated almost exclusively with these two features.2

→Adenosarcomas are composed of benign epithelial and malignant stromal components.

Gallardo A, Prat J. Mullerian adenosarcoma: A Clinicopathologic and Immunohistochemical study of 55 cases Challenging the Existence of Adenofibroma. Am J Surg Pathol. 2009 Feb;33(2):278-88.