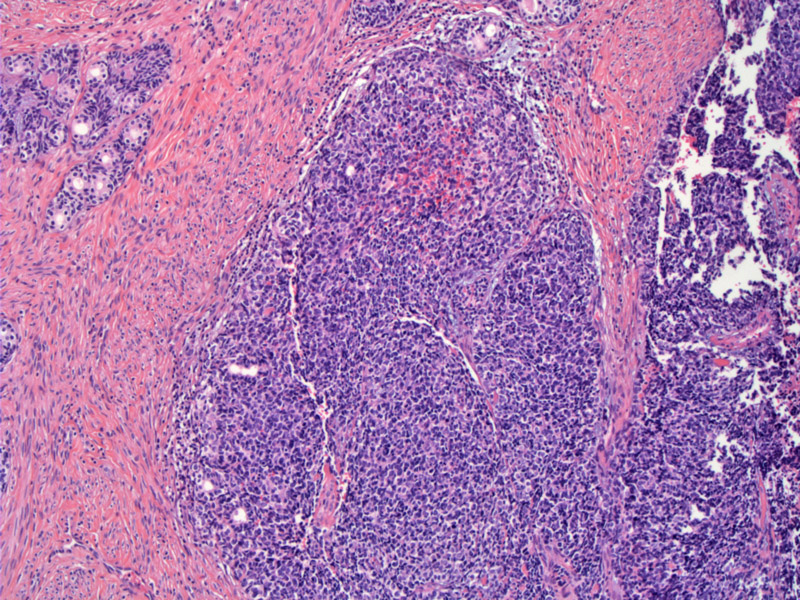 A closer view demonstrates that nests of adenoid basal carcinoma originate directly from the overlying dysplastic squamous epithelium. Small nests of cells are budding off from the basal layer.

The tumor nests are usually described as not eliciting a prominent stromal response. Small round and sometimes anastamosing tubular structures are seen in the dense stroma.

Note the palisading of basaloid cells around the periphery of tumor islands. Some of the adenoid basal nests contain a single cystic glandular lumen.

A cribriform pattern (similar to adenoid cystic carcinoma) is seen due to the presence of true glandular lumens containing blue-tinged extracellular material, admixed with rounded foci of squamous metaplasia without dysplasia.

"Basaloid" carcinomas of cervix is currently a murky area of gyn pathology. There is no established consensus on the classification of these tumors which exhibit features similar to basal cell carcinoma of the skin. These features include nests of hyperchromatic cells with high N/C ratio with a tendency to palisade at the periphery of tumor islands. A good summary on the historical perspective and current proposed classification of basaloid tumors of the cervix is provided by Grayson et al (2002).

As mentioned above, adenoid basal carcinoma (ABC) consists of nests of basaloid cells with peripheral palisading. These nests can be found 'dropping' off the overlying squamous epithelium, similar to cutaneous BCCs, and do not generally elicit a demosplastic stromal response. In the majority of cases, an overlying high grade squamous intraepithelial lesion (HGSIL) is identified.

These tumors tend to occur in non-White women (especially black women) and in its 'pure' form (as described above), yields an excellent prognosis with no metastases or recurrences after excision with clear margins. The invariably good prognosis of these tumors has lead to some authors to propose the term adenoid basal epithelioma (ABE) in order to emphasize the benign nature of lesions and to avoid the social/psychological/financial stigma attendant with the label of "cancer". Not all authors agree with employing the term adenoid basal epithelioma, however (Grayson, Russell).

Although adenoid basal carcinomas and adenoid cystic carcinomas (ACC) may appear very similar histologically, it is important to distinguish between them, as the former has a significantly better prognosis than the latter. Both lesions share may similarities, and some authors even suggest that ABC may be a precursor of ACC. In support of this theory, up to 20% of ACC demonstrate areas of ABC (Russell). Shared features include: (1) tendency to occur in post-menopausal non-Caucasian women, (2) association with HGSIL and high-risk HPV types (3) capacity for divergent neoplastic epithelial differentiation.

ACC differs from ABC in the following ways: (1) ACC is associated with a desmoplastic stromal reaction, which is typically absent in ABC, (2) Nests of ACC are larger, with cribriform architecture, (3) Mitosis and necrosis are more prominent in ACC, (4) ACC is a grossly detectable, friable ulcerated cervical mass and a 'pure' ABC lesion is undetectable grossly (except for the associated HSIL component).

Treatment is best performed with a cervical cone biopsy, which aids in diagnosis of coincident lesions.

Prognosis is excellent in its 'pure' form (meaning not associated with other malignancies other than HGSIL) and excision is curative. Must be distinguished from adenoid cystic carcinoma, which has a much poorer prognosis.

1 Grayson, W; Cooper, K. A Reappraisal of “Basaloid Carcinoma” of the Cervix, and the Differential Diagnosis of Basaloid Cervical Neoplasms. Advances in Anatomic Pathology