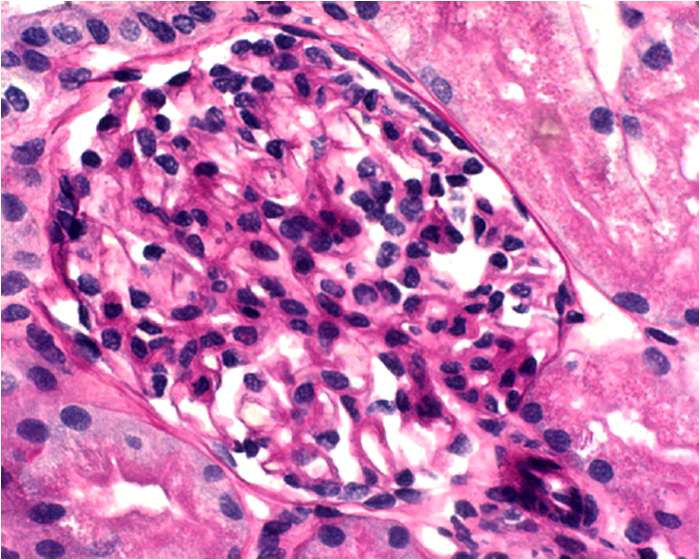 An example of a relatively normal appearing glomerulus with a slight increase in mesangium. This represents the earliest change in the glomerulus. Later changes include segmental to global mesangial expansion and hypercellularity.

More advanced changes are seen here, with glomerular sclerosis and advanced interstitial fibrosis. Some foam cells may be seen in the interstitium.

Electron microscopic features include a definite abnormality of the glomerular basement membrane, with splitting of the lamna densa. The appearance is one of laminations or multilayering of the basement membrane. The clear areas between the laminae are of filled with granular, mottled appearing material, thought possibly to represent cell processes. The podocytes are also effaced.

Alport syndrome is an inherited abnormality of collagen that results in renal insufficiency and often deafness and ocular disturbances. The inheritance pattern is heterogeneous , with an X-linked form (85-90% of cases) and an either autosomal dominant or recessive form (10-15%). The primary abnormality lies in an inability to undergo the normal isoform switching of type IV collagen in the kidney -- basically, the alpha-1 (IV) and alpha-2 (IV) chains that predominate in the dearly developmental period of the kidney are not able to switch over to the mature forms which are alpha-3 (IV), alpha-4 (IV), and alpha-5 (IV). The latter are considered more resistant to proteolysis.

How the collagen defects actually result in renal injury remains rather obscure. One theory suggests that there is compensatory increase in other collagen chains, namely type V and VI that deposit in areas other than where the normal collagen deposits, resulting in glomerular basement membrane abnormalities, glomerular sclerosis, interstitial fibrosis, and eventual fibrosis.

Sensorineural deafness is frequent but not ubiquitous, as some families may demonstrate severe nephropathy but normal hearing. Ocular abnormalities may also ensue and may include anterior lenticonus (with its slowly progressive deterioration of vision), dot-and-fleck retinopathy (usually asymptomatic), and/or posterior polymorphous corneal dystrophy (asymptomatic or results in visual impairment).

The condition usually appears in boys under 10 yrs of age. Presenting signs include microscopic or macroscopic hematuria, either at birth or before school age. Eventually proteinuria sets in and is prorgessive. Hearing loss and ocular abnormalities usually become apparent later in childhood, before the development of renal insufficiency.

There is no specific treatment except for renal transplantation.

Affected males practically always progress to renal failure; the interval to renal failure is often dependent on the kindred and type of mutation. Some develop chronic renal failure in their 30's while for others it may occur much later. Females seldom have significant renal insufficiency.