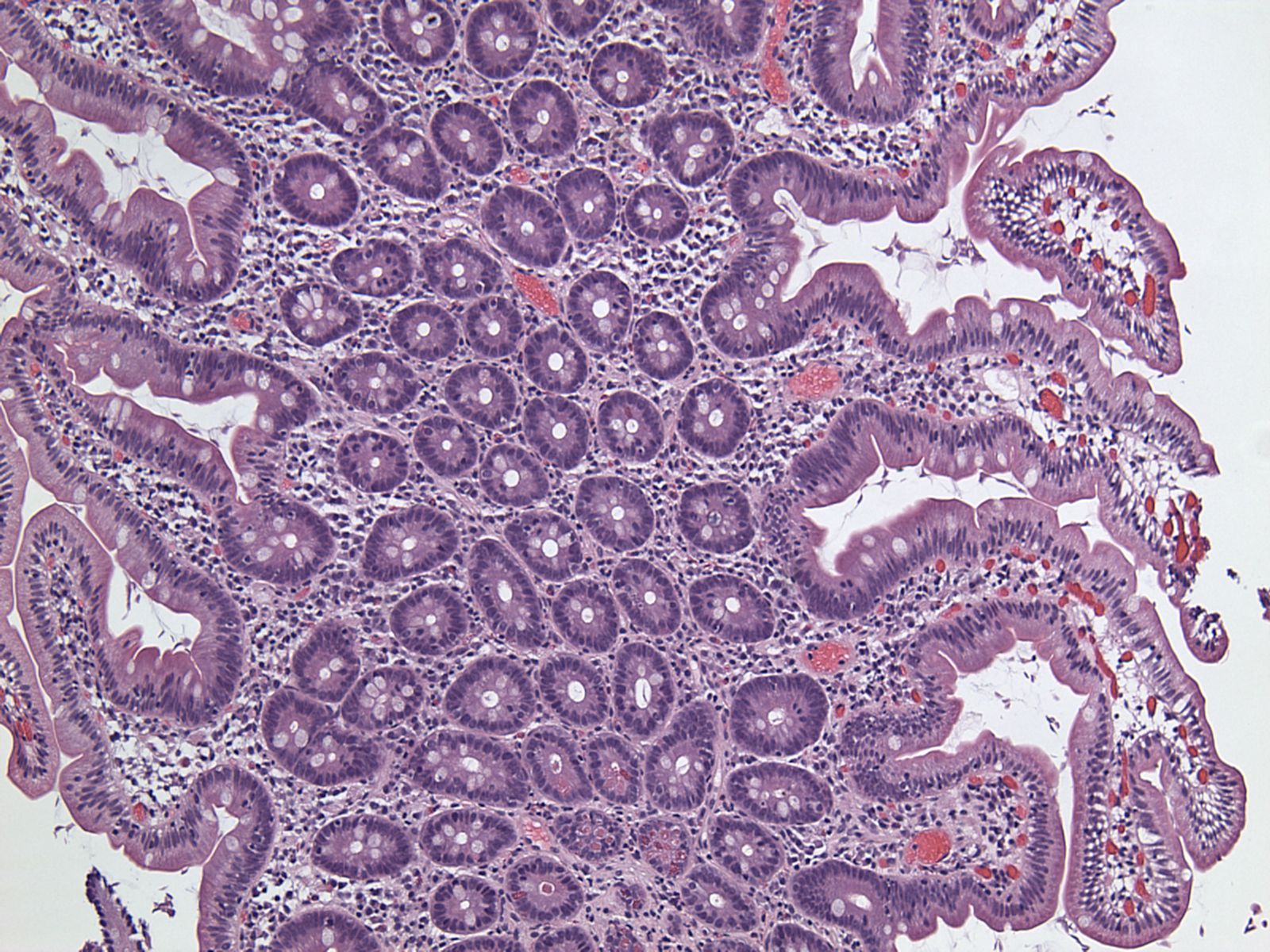 On low power the duodenum appears unremarkable, with no alteration in cellularity or architecture.

The villous architecture is preserved and a minimal or absent inflammatory response is typical.

Closer inspection of this area shows organisms residing in the lumen, without any inflammation.

Trophozoites, pear-shaped (but elliptical or comma-shaped in profile) are seen in the lumen of the duodenum.

Another area better shows the teardrop shaped outline of the organisms. Interestingly, Giardia causes disease without penetrating the epithelium, invading the surrounding tissues or entering the blood stream.

Giardia is the most commonly found intestinal parasite worldwide. Infection usually occurs via contact with contaminated water. Giardia exists in two forms, as an infectious cyst and a motile pear-shaped trophozoite with flagella. Cysts are ingested and "hatch" in the GI tract. Their favorite habitat is the duodenum and jejunum, as bile salts stimulate their excystation, growth and replication (Noffsinger).

The trophozoites are found in the lumen of the duodenum, close to the epithelial cells and some may even be attached via tiny suction discs. Typically, the villous architecture of the small bowel is not altered and no inflammatory reaction is seen. However, increased intraepithelial lymphocytes and villous atrophy, blunting or shortening can be found in some cases.

Note that the absence or marked decrease in plasma cells in the lamina propria in a patient with giardiasis should alert the pathologist to the possibility of an underlying immunodeficiency disorder.

Malabsorption and maldigestion mainly result from shortening of epithelial microvilli. Enterocytic injury is mediated via activated T lymphocytes. There is Giardia-induced disruption of epithelial tight junctions, which in turn increases intestinal permeability, and there is also loss of epithelial barrier function resulting from Giardia-induced enterocyte apoptosis.

Symptoms may is vary, ranging from asymptomatic to sudden onset of explosive foul-smelling diarrhea for some unfortunate individuals. The most common presentation is onset of diarrhea of a week's duration after an incubation period of 1-3 weeks. Some patients experience abdominal cramps, flatus, malabsorption and weight loss. Chronic infection may ensue if the host immune response is impaired.

Metronidazole is very effective. Albendazole is often recommended for children as it has fewer side effects (Noffsinger).