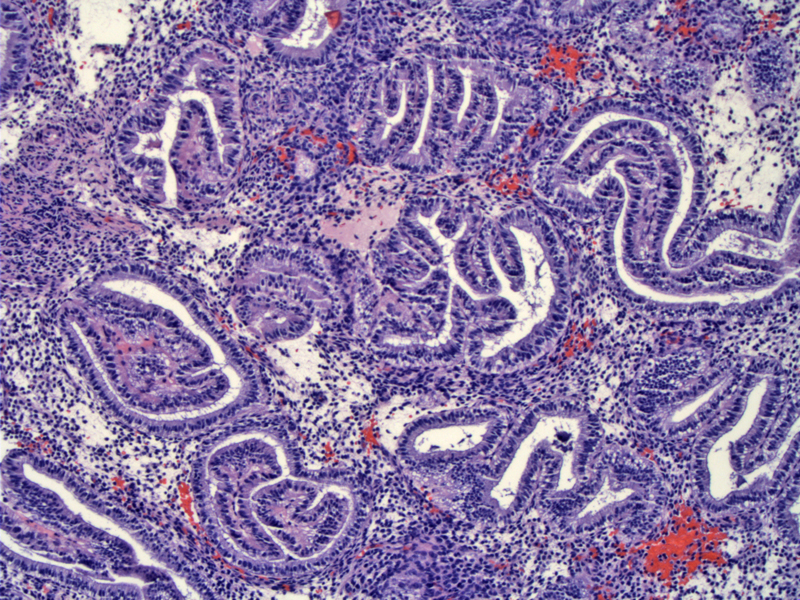 The subnuclear vacuoles are partially developed. The stroma is edematous and contains thin-walled blood vessels. Note that the stroma in proliferative phase can be variable, ranging from spindled and cellular to edematous. Mitotic figures are common in the proliferative stroma.

Another image demonstrating partially formed subnuclear vacuoles and tubular glands of proliferative phase endometrium. The glands are evenly spaced, although this may not be evident due to tangential sections of tortuous glands.

A closer view demonstrates developing subnuclear vacuoles, which are in the process of forming a neat row flush against the basement membrane.

Mitotic figures are frequent findings in Day 16 endometrium, although the mitotic activity is not as robust as in the proliferative phase (day 4-14).

In this image, the subnuclear vacuoles are well-developed and form an even row at the basement membrane, resembling piano keys. If over 50% of the glands exhibit these changes and no mitotic activity is seen, a day 17 endometrium can be assigned and one can reasonably assume that ovulation has occurred.

Some authors consider day 16 as part of the "interval phase", which occurs 36-48 hours after ovulation (day 14). On day 16, the endometrium exhibits changes attributed to ovulation, however, do not fully meet the criteria to confidently confirm ovulation. The glands are tortuous and mitotically active (similar to late proliferative endometrium). Subnuclear vacuoles are present, but discontinuous and only partially developed.