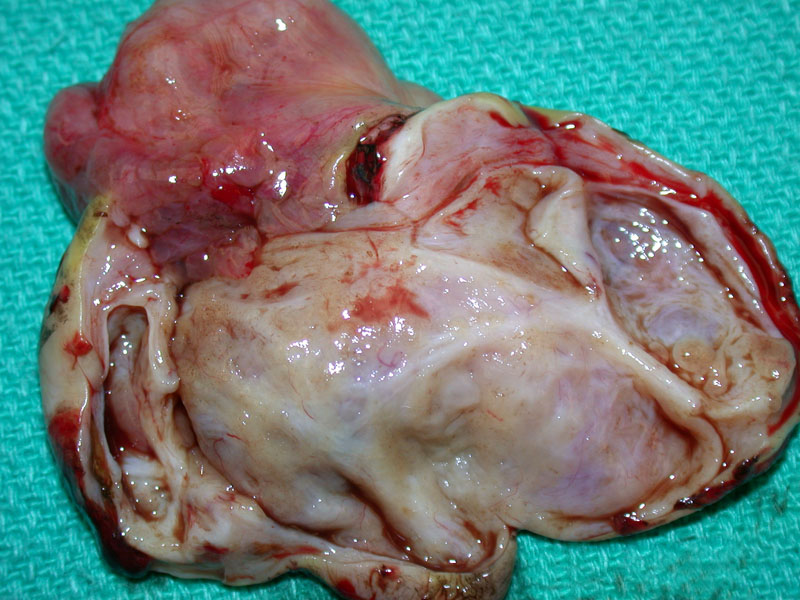 A gross image of an endometriotic cyst with thickened tan lining with slight trabeculations.

Aspiration of an endometriotic cyst yields clusters of cuboidal glandular cells without atypia.

This endometriotic cyst retains a largely intact epithelial lining of attenuated cells, with a thin layer of underlying compact endometrial stroma. The contents show fibrin and some inflammatory cells, which are constituents of the chocolate cyst.

Another view of this fibrous endometrial stroma with prominent hemosiderin deposition.

The cystic lumen is filled with fibrin and blood, and often, the epithelium lining may be entirely absent. Note the presence of hemosiderin-laden macrophages at the interface -- they are often termed pseudoxanthoma cells as these histocytes ingest hemofuscin and hemosiderin.

Yet another view of altered stroma containing spindled fibroblasts and hemosiderin deposition.

This case demonstrates a recently pregnant patient. As such, the cystic lining shows decidualized stroma cells with abundant pink cytoplasm. Ovarian stroma is shown on the left. Although not demonstrated here, the endometrial glands may sometimes show an Arias-Stella effect.

A closer view of decidualized stromal cells which are plump with abundant eosinophilic cystoplasm. Hemosiderin-laden macrophages are seen in the upper right.

Endometriosis is the presence of ectopic endometrial glands and stroma. In the ovary, endometriosis may be microscopic or present as large hemorrhagic cysts so-called 'chocolate cysts'.

Grossly, foci of endometriosis may be seen as punctate patches of red, blue, brown on the serosa or cut surface of the ovary. Brown spots are sometimes described as 'powder burns'. Endometriotic cysts have thickened walls which contain a brown hemorrhagic fluid, thus the moniker 'chocolate cyst'. Associated fibrous adhesions are frequently found on the serosal surface of the ovaries.

Microscopically, one sees endometrial glands surrounded by endometrial stroma against a background of ovarian stroma. The appearance of endometriosis can range widely. For example, endometrial glands may be proliferative or secretory, exhibit atypical hyperplasia or metaplasia depending on the hormonal milieu. The ovarian stroma may appear decidualized in pregnancy or be altered by hemorrhage.1,2

Endometriomas may have a very attenuated cuboidal lining that bears little resemblance to endometrial epithelium. In such instances, one must search for other key features such as hemosiderin deposition, hemorrhage, macrophages, granulation tissue and endometrial stroma.

As endometriosis consists of estrogen responsive tissue, it mostly is a disease of reproductive-aged women. While it has been reported in 5-10% of the general population, in women with chronic pelvic pain or infertility a prevalence of up to 40% has been seen. While some cases are diagnosed during evaluation of a symptomatic adnexal mass, most cases are diagnosed during diagnostic laparoscopy for chronic pelvic pain or infertility.

Endometriosis is best thought of as a chronic disease. Even "definitive therapy" which consists of a total hysterectomy and bilateral oophorectomy has recurrence rates reported up to 10%. As most patients with this disease present in their reproductive years, this treatment should be offered as a last resort and with caution. Other surgical treatments mostly involve laser ablation or excision of endometriotic implants seen during laparoscopy. Relief provided by these treatments does tend to be temporary, unfortunately. In women suffering from infertility, resection of endometriomas and implants are associated with improved fertility rates.

As most women desire to maintain fertility hormonal medications combined with analgesics are typically the mainstay of therapy. While no single hormonal therapy has been shown to be more efficacious than any other, a diverse range is available including combined oral contraceptive pills, various oral or intramuscular progestin formulations, progestin containing implants, gonadotropin releasing hormone agonists, and aromatase inhibitors. As endometriosis is a chronic disease, it is preferible to employ NSAIDS as analgesics over narcotics to minimize risk of dependance.

Symptoms tend to wax and wane over one's life, with some women experiencing relief during and after pregnancy. Most symptoms resolve following menopause, though cases of recurrent and persistent disease beyond menopause have been seen.

Note that secondary neoplasms may arise from endometriosis, most commonly endometrioid or clear cell adenocarcinoma.