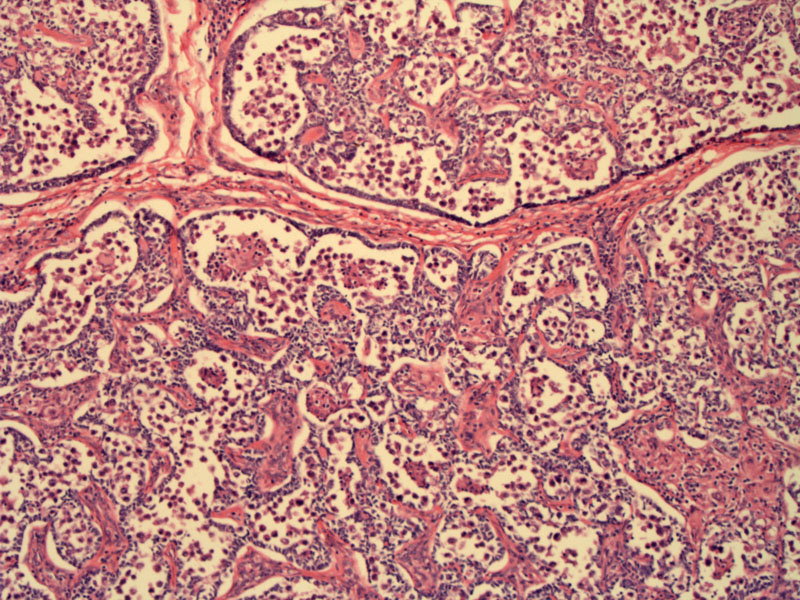 Discrete nests are composed of an intimate admixture of germ cells and sex-cord cells.
IMAGE DESCRIPTIONS

Gonadoblastoma is composed of an admixture of germ cells and sex-cord cells in discrete nests. These nests are separated by fibrous stroma containing with scattered Leydig cells.

The germ cells have abundant clear cytoplasm with small dense nuclei. The sex-cord cells often resemble immature Sertoli cells or granulosa cells; they often surround cylinders of eosinophilic secretions, or palisade at the periphery of the nests. These hyalinzed globules of basement membrane material are highly characteristic of this tumor.

Calcifications resembling laminated spheres are found in most gonadoblastomas.

A higher power of the interface between the gonadoblastoma (on the right) and the dysgerminoma (on the left). Note the poorly formed nests of malignant dysgerminoma cells embedded in stroma with scattered chronic inflammatory cells.

The malignant dysgerminoma cells are polygonal with clear cytoplasm. The centrally or eccentrically placed nuclei sometimes has a squared-off contour and contains coarse chromatin. The nucleoli is usually prominent, but is less so in this particular image.

Gonadoblastoma is a very rare tumor that arises almost exclusively in patients with abnormal gonads (streak gonads, indeterminate gonads or dysgenetic testes). Most patients are phenotypically female with a Y chromosome in their genotype (46 XY or 45X/46XY mosaic) and have androgen insensitivity, although some are phenotypically male. 1

Average age of diagnosis is 18, when patients are evaluated for primary amenorrhea or structural abnormalities of the genital tract. The classic androgen insensitive patient is a tall woman without pubic or axillary hair development, normal breast development, and a blind ending vaginal pouch. 40% of cases are bilateral, and the tumor size ranges from microscopic to 2-3 cm. The cut surface is tan to white.

Bilateral gonadal excision is recommended. These tumors have a strong tendency to be bilateral, and removal of both gonads is necessary to remove the risk of malignant transformation of the tumors. These patients do not have functional gonads, therefore, preservation of fertility is not a concern.

Mostly benign, however, a malignant tumor may arise out of the gonadoblastoma. The malignant tumor is usually a dysgerminoma, but approximately 10% are yolk sac tumors or embryonal carcinomas.