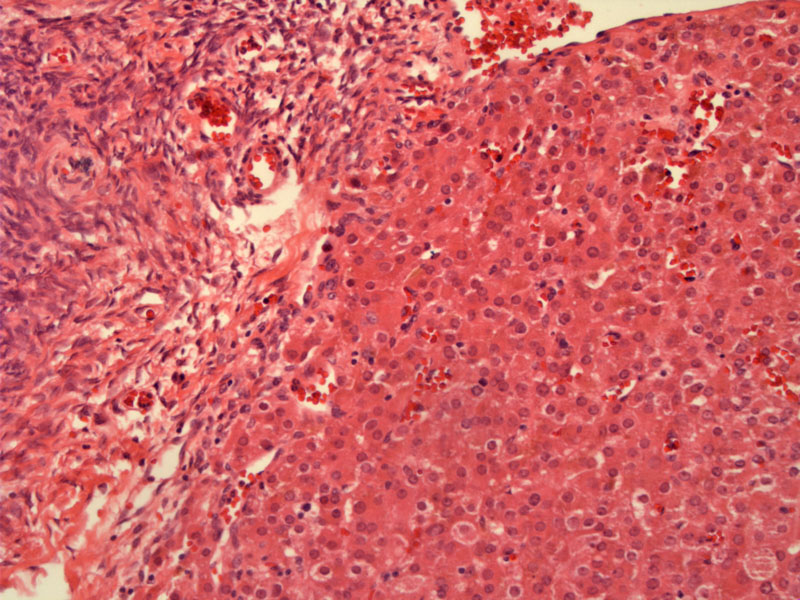 Leydig cells are well-defined, but not encapsulated.
IMAGE DESCRIPTIONS

Leydig cell tumors are well-circumscribed, but not encapsulated. As seen here, the tumor exhibits a broad pushing border. The normal ovary is on the left.

The tumor cells resemble that of the Leydig cells found in the testis. They have round, polygonal shapes with abundant pink granular cytoplasm. Note that many of the cells contain brown lipochrome pigment, which is a common finding. Although Reinke crystals are the hallmark features of Leydig cell tumors, however, they are only identifiable in 50% of cases. One might have better luck looking for intracytoplasmic eosinophilic hyaline globules, the putative precursors to the Reinke crystals. Unfortunately, we did not have luck finding either the crystals or globules in any of our current Leydig cell tumor cases.

The nodules of tumor are separated by fibrous stroma. In other instances, the stroma may be hyalinized, collagenized or edematous.

Another case of Leydig cell tumor demonstrates cells with abundant eosinophilic cytoplasm. The nuclei are small and round. They can range from hyperchromatic to vesicular. Often the nucleoli are visible.

These tumors occur in all age groups but most commonly in women aged 20-30. The classic presentation is virilization, acne, hair loss, and voice changes with elevated serum testosterone levels. Rarely, there are estrogen manifestations such as endometrial hyperplasia, most likely due to peripheral conversion of testosterone to estrogen.

The vast majority are unilateral and located at the hilus. They are quite small, with an average diamter of 3-5 cm.

As most tumors occur in reproductive aged women, they can be treated with unilateral salpingo-oophorectomy. In women with high grade or stage disease, surgery can be followed with a VAC chemotherapy regimen (vincristine, dactinomycin, cyclophosphamide).

As these tumors are hormonally active, they are often caught as early stage disease. Overall five year survival ranges between 70 and 90%.