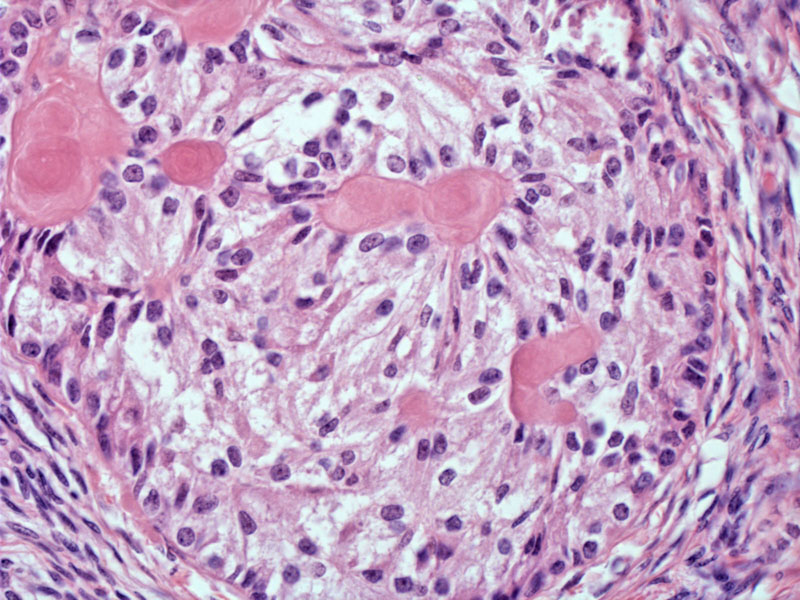 SCTAT is composed of nests of tumor cells which form tubules containing hyalinized eosinophilic material. The tubules can be "simple" (encircling one hyaline core) or "complex" (encircling two more more hyaline cores). Note that the tubules are composed of two layers of cells with "antipodal" nuclei. To further define "antipodal", imagine two cells paired together. The cell membranes are adhesed together on one side, but their nuclei are located as far away from each other as possible. These double-lined tubules surround one or several hyaline cores. This is what is meant as an "annular" or ring-like structure. The tumor cells are columnar and have clear or foamy cytoplasm. The nuclei are round with visible small nucleoli.

Another case of SCTAT shows areas of more solid growth adjacent to characteristic areas containing hyaline cores surrounded by annular tubules. The nests of tumor cells are usually separated by a fibrous stroma, although in non-JPS SCTAT, the nests can coalesce and the rim of fibrous stroma becomes very attenuated. Solid growth and coalescent nests are more commonly seen in non-JPS tumors.

Sex cord tumor with annular tubules (SCTAT) can be divided into two categories:

(1) Associated with Peutz-Jeghers syndrome (PJS): Approximately one-third of SCTAT occurs in women with PJS. PJS, an autosomally inherited disorder, has been attributed to the mutation of the STK11 tumor suppressor gene on chromosome 19. Patients with PJS are prone to hamartomatous intestinal polyps, mucocutaneous pigmentation, adenoma malignum of the cervix and carcinoma of the GI tract, pancreas and breast. Interestingly, all women with PJS have SCTAT in their ovaries, although the tumor is generally microscopic. The ovaries were probably removed or sampled for other types of ovarian tumors which were clinicall detectable. The vast majority of SCTAT in this setting is benign. Note, however, the patient is closely monitored for other gynecologic complications such as adenocarcinoma of the cervix.1,2

(2)Non-syndromic SCTAT: Two-thirds of SCTAT occur in patients who do not have JPS. These tumors do not contain the STK11 mutation. These tumors can occur at a wide age range (age 6-76). Unlike JPS associated tumors, SCTAT in this setting is frequently symptomatic. In half the patients, a unilateral palpable adnexal mass is present. Depending on the age of the patient, estrogenic manifestations include precocious puberty (in prepubescent girls) and adnormal menstrual bleeding in older women. ~15-20% of non-JPS SCTAT are malignant.1,2

In JPS patients, the treatment is generally conservative (ie. observation) as the tumors are benign. In contrast, 15-20% of non-JPS SCTAT are malignant. These tumors have a high propensity for lymph node metastases, therefore, for patients with non-JPS SCTAT, unilateral oopherectomy with staging and lymph node dissection is recommended. For metastatic disease, chemotherapy has had variable success.