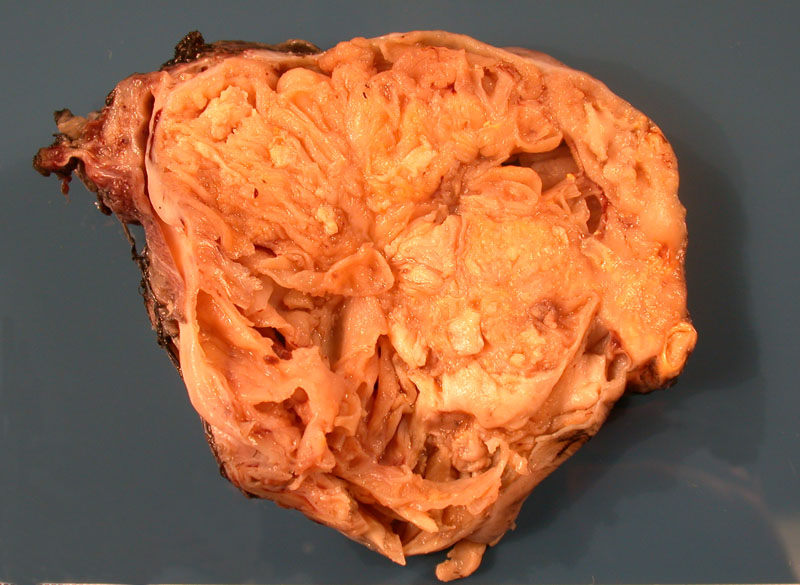 A multiloculated cystic and solid tumor can be seen. TCCs of the ovary are usually unilateral and average approximately 10 cm in diameter. In one large study, tumors ranged from 3.0 to 30 cm; 60% were solid and cystic, 24% solid, and 16% cystic (Eichhorn).

Broad irregular anastamosing cords of closely packed malignant cells infiltrate the ovarian stroma. A Brenner component was lacking, a feature of the diagnosis of transitional cell carcinoma of the ovary. Although not seen in this tumor,

Necrosis (upper center image) and thick bands of pleomorphic cells can be appreciated. The malignant cells have ovoid nuclei. Occasionally, one may see a longitudinal groove in the nuclei.

The category of 'transitional cell carcinoma of the ovary' represents primary ovarian carcinomas in which definite urothelial features are identified, but no benign or borderline proliferating Brenner tumor are found. In contrast, malignant Brenner tumors (by definition) must contain adjacent areas of benign and borderline Brenner tumor. It is critical to make this distinction as recent studies have revealed that they are two distinct separate tumors with vastly different prognostic implications.1

Microscopically, two different patterns of ovarian TCC can be seen: (1) Papillae with fibrovascular cores project into cystic lumens. The papillae and cysts are lined by malignant transitional cells with atypical nuclei and one or more prominent nucleoli. Mitotic figures are easily found. Invasive nests of tumor will be present in solid areas. (2) This less common pattern is called 'Brenner-type', consisting of nests and cords of malignant transitional cells invading the fibrous ovarian stroma.1

IHC studies have revealed different immunophenotypes between TCCs and Brenner tumors. TCCs have p53 mutations and p16 protein overexpression, while borderline and malignant Brenner LMP tumors do not overexpress these proteins, suggesting diverging pathways of oncogenesis (Cuatrecasas). Furthermore, Brenner tumors express markers seen in normal and neoplastic bladder urothelium such as CK 13, CK20 and uroplakin III. In contrast, TCCs were negative for these markers and strongly express CA 125 (Reidel).

Another study (Logani) confirmed these findings with most of the Brenner tumors expressing UROIII, thrombomodulin and CK20 and most of the ovarian TCCs lacking of expression of these markers. The Logani study also compared ovarian TCCs with bladder TCCS and found ovarian TTCs to be largely CK20-, UROIII- and WT1+ and bladder TCCs to be CK20+, UROIII+ and WT1-. These IHC panels will be helpful in differentiating primary ovarian TCCs versus malignant Brenners versus metastatic bladder TCCs.

These IHC stuides have lead most authors to conclude that TCCs are a poorly-differentiated adenocarcinoma akin to other surface epithelial ovarian tumors such as serous and endometrioid types. TCCs and Brenner tumors share transitional cell type morphology only, but TCCs do not exhibit true urothelial differentiation. The natural progression of these tumors also lend support to this theory, as Brenner tumors (even borderline and malignant) have a much better prognosis than transitional cell carcinomas of the ovary.

Patients typically experience abdominal fullness and are diagnosed with an adnexal mass.

2 Reidel I, Czernobilsky B, Lifschitz-Mercer B. Brenner tumors but not transitional cell carcinomas of the ovary show urotehlial differentiation: immunohistochemical staining of urothelial markers, including cytokeratins and uroplakins. Virchows Arch. 2001. Feb;438(2): 181-91.