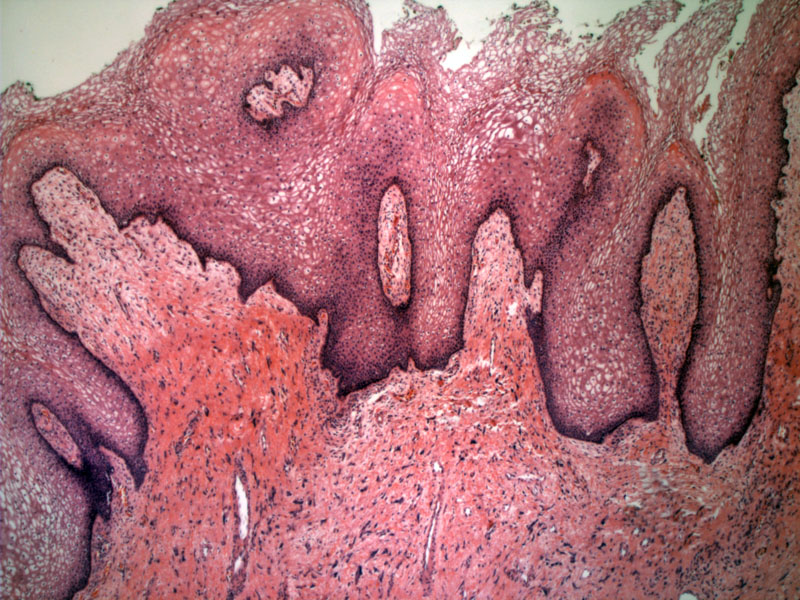 The overlying epithelium is hyperplastic and the underlying stroma has an almost papillary structure. Fibroepithelial polyps are usually pedunculated but may be broad based (sessile).

Extension of the atypical stromal cells to the epithelial-stromal interface is a characteristic feature. Note the hyperchromatic, stellate, almost wedge shaped stromal cells.

Fibroepithelial stromal polyps arise from cells located in the distinctive subepithelial stroma of the distal female genital tract (Fletcher). They are thought to be benign reactive proliferations in response to an altered hormonal environment (pregnancy or hormone replacement therapy). The presence of estrogen and progesterone receptors in the neoplastic stromal cells further support this theory.

Microscopically, these polyps contain a central fibrovascular core and a cellular stroma. The overlying squamous epithelium may be hyperplastic. Most notably, stellate and mulitnucleated stromal cells are seen in the stroma, most commonly located near the epithelial-stromal junction. Some polyps may exhibit pleomorphism, high cellularity and high mitotic activity.

Typically arise in the vulvovaginal region of young reproductive age women, most commonly during pregnancy). Usually an incidental finding, but may present with bleeding or the sensation of a mass.

Clinically, the lesion is appears pendunculated or polypoid and less than 5 cm in diameter. Occasionally, it may have multiple projections, mimicking a condyloma (Fletcher).

Benign; can recur locally if excision is not complete. Multiple polyps can arise during pregnancy and generally regress following delivery.