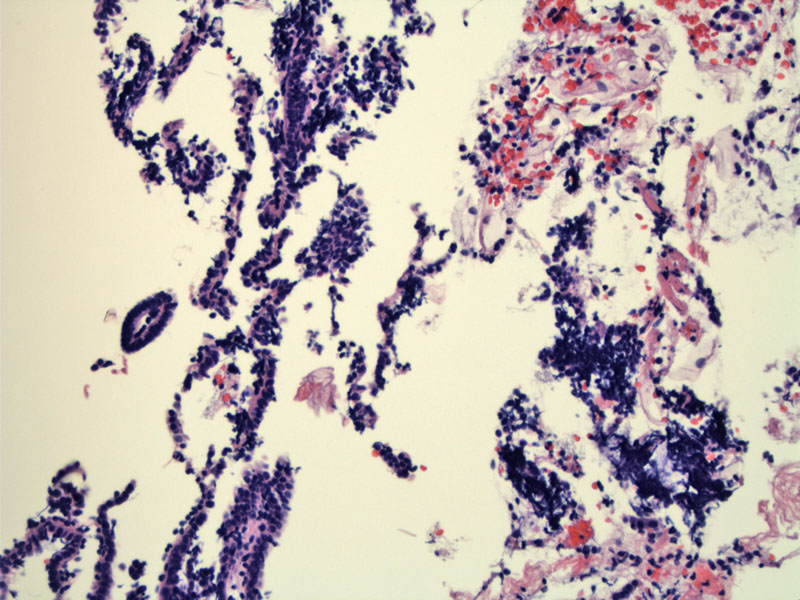 Atrophy is the most common finding in those on tamoxifen.

Endometrial polyps from treated patients can be edematous, mxyoid or fibrous. In this example, the stroma is quite edematous.

Myxoid change is seen admixed with the edematous stroma.

The cysts are unusually large and irregularly shaped. Often cysts are back to back.

Again, some of the cysts are strikingly large, while other glands are small with some branching.

Tamoxifen, a selective estrogen receptor modulator (SERM), is a potent antiestrogenic agent and is employed successfully in the adjuvant therapy of breast cancer. However, its effects on the uterus are more complicated, acting both as an agonist and antagonist of estrogen depending on the menopausal status of the woman and dose/duration of drug administration.

In a review of 700 women treated with tamoxifen conducted by Deligdisch and colleagues, 61.14% of cases demonstrate non-pathologic changes such as atrophy. Pathologic changes were found in the remaining 39.86% of cases and included polyps (23.14%), glandular hyperplasia (8%) and metaplasia (3%). Endometrial carcinoma was found in 4.71% (33 cases), of which 9 were well-differentiated endometrioid adenocarcinomas, and 24 were moderately or poorly differentiated (of which 13 had non-endometrioid components such as serous, clear cell, MMMT components). From this data, the authors concluded that 1/3 of patients developed endometrial polyps, hyperplasia and metastatic consistent with hyperestrogenism. Endometrial cancers induced by tamoxifen were uncommon (4.71%), however, the tumors were often high-grade and invasive (Deligdisch).